SINGAPORE--The new company that rose from the sale of Nokia's devices business has appointed its first CEO, Urpo Karjalainen, whose previous stints included BlackBerry and of course, Nokia. 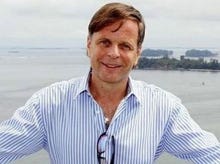 Nokia is dead, Newkia rises from its ashes Singapore-based Newkia was formed the day the US$7.2 billion Microsoft-Nokia deal was announced, with the sole aim of acquiring Nokia employees and know-how but focusing on the Android platform.

In a statement released Wednesday, Newkia said Karjalainen also has been named the company's shareholder and founding partner. Describing the new CEO as Asia's the "most accomplished mobile executive in Asia over the last 15 years", Newkia Chairman Thomas Zilliacus said: "Under Urpo's leadership, Asia became Nokia's largest and most profitable market... No other mobile executive in Asia has the contacts, reach, and credibility among Asia's mobile operators, distributors, and dealers that he has."

He further revealed that the company was "moving rapidly toward the deployment" of its first phone, which is targeted for release in the second half of 2014.

Newkia has yet to decide where its offices will be located, and currently runs its business out of Singapore.

Zilliacus first spoke with ZDNet in September, following news of Microsoft's US$7.2 billion deal to buy out Nokia's devices and services unit, to discuss his plans to set up a company--Newkia--with the goal of taking Nokia know-how to build Android phones. Himself a former Asia-Pacific head of Nokia, he believed the company would have seen a better fate if it had gone the Android path, instead of Windows .

He later told ZDNet he had received e-mail from several Nokia employees looking to join Newkia, adding then that that several members of the company's core management team, including the CEO, already had been identified. Zilliacus is also executive chairman and founder of Mobile FutureWorks, which is the majority owner of Newkia and YuuZoo, a vendor that helps companies build social networks with e-commerce capabilities.

Karjalainen said: "I see a huge opportunity for Newkia in the current market, and I am very excited to be part of creating something new built on Nokia's incredible legacy. We are building a team that will carry forward the best know-how and qualities of phones that made Nokia the world-leading mobile phone brand for 14 years."

The CEO, until March 2013, had served as BlackBerry's head of business operations for India, Greater China, Southeast Asia, Australia, and New Zealand.  Before joining BlackBerry, he spent some 20 years at Nokia where he held various senior positions in Asia including corporate senior vice president and general manager of Nokia China from 2001 to 2004, and Asia-Pacific vice president of strategic marketing as well as vice president of sales for Nokia's mobile phones business from 1997 to 1999.