Nokia has scored a win for its mapping and location brand Here , and will soon join Google on Toyota Europe's Touch & Go navigation system. 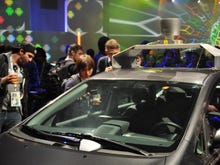 Toyota's European arm will install the Here Nokia Local Search for automotive products in its Touch & Go navigation and infotainment systems from next year.

Nokia already has some history with Toyota: the car maker already uses Nokia maps in its navigation systems. Toyota "will collaborate with Nokia to study more services that leverage the Nokia Location Platform, including best-in-class content," Nokia said in a statement.

Nokia will also have to fight it out with search and mapping rival Google. "In the current navigation systems we have Google Local search which will be complemented by Nokia Places from 2014," a Toyota spokesman said. Toyota has been recently been promoting in its Verso DPL vehicle, which currently ships with Google Local Search, Maps, and Points of Interest.

Nokia's mapping location services business, which is to be renamed Here from next quarter, remains a small albeit profitable part of the company. Nonetheless, it has racked up a number of automotive wins including Audi, BMW Chrysler, Dacia, ESRI, Ford, Garmin, Hyundai, Kia, Mercedes, Nikon, Pioneer, Scania, Toyota, and Volkswagen.

Nokia also already supplies content to Toyota in the form of automotive-grade maps and reference data, but the company's announcement on Thursday only refers to Toyota Europe's Touch & Go systems. The feature will begin appearing in the system from early 2014 in Europe, Russia, and the Middle East, and is currently included in some models of Toyota's Yaris, Verso, Auris, and Prius vehicles.

"It is an excellent basis for creative location-centric concepts and we are delighted to bring this technology to our customers," said Derek Williams, Toyota Europe's GM of Telematics & Multimedia.

Competition in car-mapping services is heating up with the recent arrival of Apple's Siri Eyes, its voice assistant tweaked for use without visual cues or the need to interact with the onscreen menus. Honda announced yesterday that Apple's Siri voice assistant will be added to some of its upcoming Honda and Acura vehicles.