Nokia’s N97 hit my desk on Friday courtesy of Clove and I’ve been fiddling with it over the weekend.

Nokia is trying to pull off a clever trick with the N97. The handset is right out of the old Communicator line-up in that there is a qwerty keyboard here. OK, the design isn’t clamshell like the Communicator handsets. Instead it mimics the likes of HTC’s Touch Pro 2 by having a screen which slides and tilts so that it sits at a good viewing angle when the N97 is on the desk. I approve. That notwithstanding, Microsoft Exchange support helps make the case for this handset to business users. 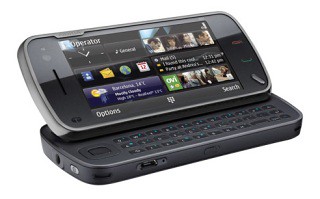 But the user interface design and build – as well as the name - cry out that this is an N series handset aimed primarily at a more consumer centric group. The handset looks like other N series devices being black and silver and sporting lots of plastic.

Now, I am not saying that businesspeople aren’t consumers too. Not saying that both might like the BBC iPlayer, YouTube client, 5 megapixel camera, calendar, Ovi Store, FM radio, FM transmitter, 3.5mm top-mounted headset, Wi-Fi, GPS, etc, etc (Bonnie has written a detailed review and I’m not going to cover the same ground here).

What I am saying is that Nokia seems to have thrown everything at the N97, slapped a very hefty price tag on it, and then expects it to live up to the market leaders – i.e. the likes of HTC’s Hero and the iPhone 3G S, and capture users of Communicators when, in fact, it seems like a lesser handset to me.

For example, the touch screen. Not only does it lack pixels if it is to be considered leading edge (640 x 360 as opposed to the HTC Touch Pro 2’s 480 x 800, for example), but the touch screen is resistive (versus capacitive). Yes, HTC uses resistive screens too, but if you are going for leading edge, it is one of the things you need to consider.

The touch version of S60 gets its second outing here, having been first seen in the unashamedly consumer-facing 5800 XpressMusic. Its inconsistency on screen-press requirements (one, or two taps to select – it varies) doesn’t endear me, and it feels very much as if touch has been added on top of S60 rather than being made an integral feature.

What is probably going to stymie most business users, though, is the keyboard. Its three QWERTY rows are made up of smallish keys, fairly flush to the backing. I found it easier and faster to type than I’d expected, but there is no doubting the keyboard has been truncated to make space for a D-pad which could probably have been fitted onto the screen section.

Why is the space bar on the far right edge of the bottom row? And the one shift key at bottom left? There’s no room for dedicated keys for ‘@’, Wi-Fi activation, application shortcuts. It’ll take some users an age to acclimatise and anyone thinking of trading up from a Communicator would do well to compare their current device’s keyboard with what’s on offer here.

This all sounds incredibly negative, and I admit I have chosen just a few things to focus on which help make my point. Which is that Nokia should take a long, hard look at what the top end of the smartphone market is doing right now and think about innovating, and stealing the thunder of the current market leaders. The N97 is good, but it could have been great.