In a first for the smartphone world, Nokia has taken the interesting step of releasing a 3D printing Development Kit for its Lumia 820.

The 3D kit, available on Nokia's site from Friday, includes mechanical drawings of the back shell of the Lumia 820, which will allow anyone lucky enough to have a 3D printer to print their own smartphone covers.

"We are going to release 3D templates, case specs, recommended materials and best practices — everything someone versed in 3D printing needs to print their own custom Lumia 820 case," Nokia community and developer marketing manager John Kneeland said on Nokia's blog, where links to the 3D kit can be found.

Interest in 3D printing has grown rapidly with the growing availability and falling prices of 3D printers like the MakerBot, which costs around $2,000. 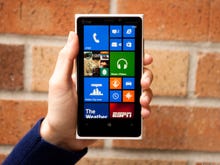 Seven days with Nokia's Lumia 920: The good Nokia has pinned its hopes on Windows Phone 8 and its new flagship handsets, the Lumia 920 and Lumia 820. I spent a week using the Lumia 920 as my only phone - read on to find out where it shines.

On the one hand, Nokia is giving customers the tools to build what they would otherwise purchase from Nokia or a third-party maker, but the move certainly can't hurt the company's comeback efforts — and image — by opening up to the growing and tech savvy 3D print community.

Nokia chief Stephen Elop had two words to say about the move on Twitter: "very cool".

Kneeland said 3D printing helps Nokia with "rapid prototyping", but it also opens up the possibility of Nokia passing the torch of making phones to others by simply selling "some kind of template".

"In the future, I envision wildly more modular and customizable phones," said Kneeland.

"Perhaps in addition to our own beautifully designed phones, we could sell some kind of phone template, and entrepreneurs the world over could build a local business on building phones precisely tailored to the needs of his or her local community. You want a waterproof, glow-in-the-dark phone with a bottle-opener and a solar charger? Someone can build it for you — or you can print it yourself!"