The deal is almost done: Nokia shareholders look set to approve the sale of the Finnish company's devices and services unit to Microsoft today.

At an extraordinary general meeting held in the Helsinki Ice Hall on Tuesday, Nokia said the vast majority of shareholders that voted by proxy had cast their ballot in favour of the Microsoft buyout. The non-proxy voters will cast their vote in person today. 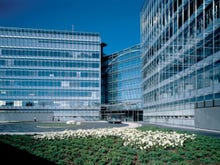 From emotional fallout to rational analysis: How Finns saw the Nokia-Microsoft deal

After Microsoft confirmed it's buying the lion's share of Nokia – Finland's biggest company – how did the country react?

The acquisition will see Microsoft pay €5.4bn to buy the unit and also license Nokia patents for the next 10 years. All of the 4,700 Nokia's Finnish employees who work in devices and services will be transferred to Microsoft, and the country will become a new centre of mobility R&D for the company .

The prospect of a deal was first raised in February of this year when Steve Ballmer, CEO of Microsoft, met Risto Siilasmaa, Nokia's chairman, at the MWC trade show in Barcelona. The deal was officially announced in September by then Nokia CEO Stephen Elop, a former Microsoft man now in contention for the Microsoft CEO job .

Nokia will continue to operate as a separate business without the devices and services unit. It will be made up of three main strands : NSN, mapping business Here, and Advanced Technologies, which covers patents and tech research.

Nokia has promised to reveal the future direction of the three businesses shortly, with a full strategy for each scheduled to be unveiled before the deal closes.

It has said however it plans to grow its patents business — which brings in around €500m — post-acquisition by signing agreements with companies that are currently "unlicensed", and licensing out patents that have previously not been licensed at all while the company had a handset business.

Under the terms of the deal, Microsoft will buy the rights to use the Nokia brand on its mobile phones for 10 years, while the post-acquisition Nokia has agreed not to manufacture any mobile devices for the next two and a half years, or license its brand to anyone else. Theoretically, Nokia could reenter the mobile market from 2016 .

Removing the devices and services unit — which, though growing significantly , has not yet made up the ground lost in recent years — is expected to make Nokia's bottom line look a little rosier.