London's startup scene has been long on hype but short on hard data, but research out this week from Google suggests the capital's emerging tech companies are creating jobs and generating significant financing. 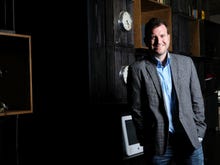 Google's Campus building, which offers office and events space for startups, sits in the heart of what is known as Tech City — a swathe of the north east of London which has become popular with early stage tech and digital companies.

Google Campus now has 22,000 members from 61 countries. And, Google says, according to the research it conducted with 2,000 of them, the types of startups visiting Campus is changing — potentially a reflection of how the broader Tech City ecosystem is maturing.

At the start of 2013, roughly two-thirds of Campus startups were involved in either technology, communications or entertainment, but by October, the trio of industries were only accounting for a third of startups between them. Education has become the third most popular sector in which to create a startup, after tech and communications (media, financial services and retail are the next three on the list).

It also appears that the London tech scene is now generating jobs as well as hype: based on the responses of more than 825 startup founders, 576 jobs have been created within the Campus community since they started coming to Campus (it's worth noting that less that 10 percent of Campus members took the survey so the number of jobs generated could be considerably higher).

According to responses from 598 startup founders that pursued funding, 274 managed to do so, raising a total of £34m, £27m of which came from venture capital investment, accelerator programmes, government grants and angel investors. Startups raised on average £75,000 from these sources, compared to £3,000 from other sources. However, the majority of startups surveyed (60 percent) are still self financing.

First known as Silicon Roundabout before morphing into Tech City, the area remains a fragile and emerging ecosystem. While there are now a number of tech accelerators operating out of London it is yet to see many big winners — the IPOs or mega-acquisitions which create get the whole cycle moving faster by reinvesting into new startups.

Many entrepreneurs still warn that London is short on the sort of late-stage financing that can turn minnows into whales — the big question is whether London can develop its tech scene into one that can rival San Francisco.