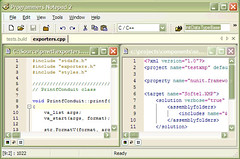 Whilst working away on a slew of CSS bug fixes at The Agency, Notepad++ wasn't. Or rather, didn't. Occasionally.

Two or three times a day, Notepad++ just froze, a blank white screen of nothingness. This highlighted the number 1 requirement of any tool, that it just works. Now I don't know why Notepad++ was freezing, and I don't have the time right at the moment to find out.

Instead, I downloaded Programmer's Notepad and tried that out instead. It's based on the same text editing engine (Scintilla) as Notepad++.

This ability to change software is one of the wonderful things about Free Open Source Software, you can do this so easily. No license numbers, time-limited demos, nag screens, nope, none of that. But I do feel bad, even though it's a matter of expediency, as I just need a text editor that works.