The U.S. National Security Agency has "swallowed" an unnamed country's entire telephone network, recording every call made over a 30-day period for instant replay.

The latest batch of leaked documents from whistleblower Edward Snowden, published on Tuesday by The Washington Post, did not name the nation states under surveillance — citing valid national security reasons — but detailed how the program, started in 2009, can record "every single" phone call nationwide. 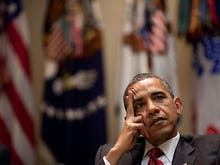 Obama unveils NSA reforms: 'Keep calm and carry on spying' The reforms set out by the President will in reality retain the status quo: The NSA will still be allowed to spy, it just won't have unfettered access to that data. By refusing to apologize for the NSA's actions, Obama buckled to a degree in order to appease an angry world stage.

Those calls can be "replayed" over a 30-day period, during which old calls are expunged to make way for the new recordings, according to the documents.

The voice interception program MYSTIC works in conjunction with RETRO, which allows "retrospective retrieval" of calls for intelligence gathering purposes. The "audio of interest that was not tasked at the time of the original call" can be singled out by analysts, who, the Post reported, listens to just a fraction of the 1 percent of the collected calls. There are thought to be billions of calls logged during the period.

Some of the details were not published by the newspaper at the request of the U.S. spy agency.

According to the program's timeline, at least five countries are thought to be under the scope of MYSTIC, with a sixth planned for later this October. Some other U.S. intelligence agencies have access to MYSTIC, but were not named.

But the calls may also ensnare Americans who communicate with family, friends, and colleagues in the unnamed countries.

This may be in contrast with President Obama's promise on January 17 that, "the U.S. is not spying on ordinary people who don't threaten our national security." He also said in an earlier speech that the NSA was "not abusing authorities in order to listen to your private phone calls, or read your emails."