No matter what you've done on the internet, you can bet the National Security Agency has a record of it.

Newly released documents leaked by Edward Snowden shed light on the scale and scope of the XKeyscore program, a program described by one classified document as the "widest-reaching" system for gathering information from the internet. 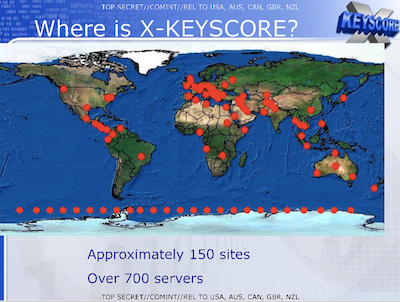 The new batch of documents detail one of the most extensive programs used in the US government's arsenal on global surveillance, more than two years after it was first revealed by The Guardian .

The program, which runs on hundreds of Red Hat Linux-based servers scattered around the globe (likely in US Embassy buildings), allows analysts to filter the vast amount of incidental data created when a user browses the web. The program allows analysts to selectively pick out usernames and passwords, browser history, emails sent and received, social media data, and even locations and detect whether or not a computer is vulnerable to certain kinds of malware or other threats.

A single unique identifier, such as a username, password, email fragment, or even images, can be used to trace a person's online activities with extreme precision. One of the documents said the program was successful in capturing 300 terrorists based on intelligence it had collected.

Out of all the programs, XKeyscore may be the largest in scope, with some field sites sifting through more than 20 terabytes of data per day, according to The Intercept , collected from the various fiber cables around the world.

The newly-released trove of documents details a broader scope of access to personal information that NSA analysts have.

The NSA said in a statement (of which portions had been used in previous statements) that its foreign intelligence operations are "authorized by law" and are "subject to multiple layers of stringent internal and external oversight."

Join Discussion for: Here's how the NSA spied on UN leaders and...