Using real-time data from buses fitted with GPS devices, the solar-powered signs are expected to give commuters updates about when their next service will arrive.
Written by Asha Barbaschow, Journalist on Sept. 26, 2018 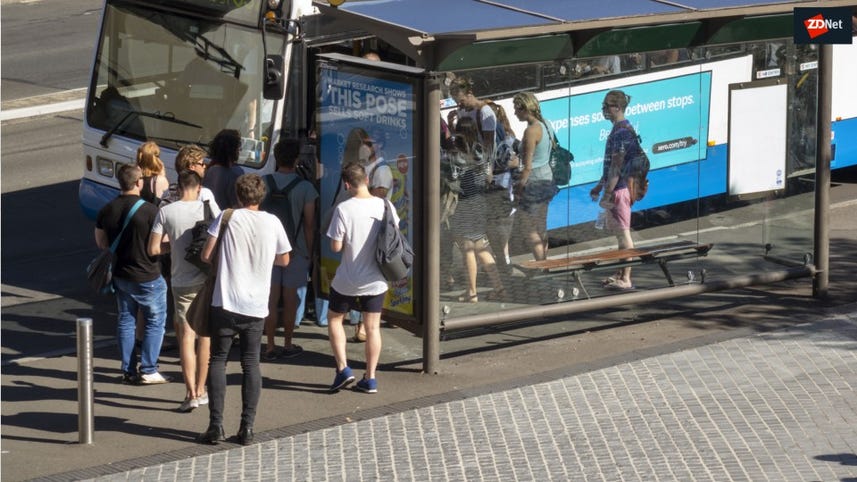 The New South Wales government is rolling out electronic displays at a few of its bus stops, using the solar-powered signs to direct people navigating the disruptions to public transport.

In a LinkedIn post from Transport for NSW (TfNSW) coordinator general Marg Prendergast, it was explained the new signs, using e-ink technology, are being rolled out at Station Link bus stops during the temporary shutdown of train stations between Epping and Chatswood.

For a cost of AU$49 million, Station Link will see the addition of over 120 new buses, expected to provide thousands of extra services from September 30 while TfNSW upgrades the rail line between Epping and Chatswood.

It is expected the line will be closed for around seven months.

"The solar-powered signs give customers real-time updates about when their next service will turn up using GPS data that tracks our buses," Prendergast said.

"We can also tailor them to tell customers about transport disruptions like road closures or traffic incidents affecting the broader network."

Prendergast said the rollout follows the trial of displays in the Sydney CBD earlier in this year.

"We trialled two of the kindle-like displays in the CBD earlier this year and received plenty of positive feedback. It's a great customer outcome to see them rolled out in and around Macquarie Park during the temporary operation of pink Station Link buses," she continued.

The state government in 2016 made available the GPS data on its fleet of buses to let commuters know how full their next bus is before it arrives.

It was shortly followed by an initiative using Twitter that sees commuters receive personalised messages through the social media app that inform them of disruptions on the state's suburban and intercity train lines.

The NSW government last year published Opal data, providing a snapshot of how many people travel where and at what time. The likes of Google have since offer new features such as real-time public transport information through Google Maps.

TfNSW's Future Transport team worked on the initiative that is touted by the state as allowing researchers and developers access and use of its most requested data to "innovate and gain insights" for a huge variety of benefits for customers and organisations.

Speaking at the 2nd Australian Digital Government Summit in Sydney earlier this year, Future Transport director of Industry Engagement and Innovation Brooke Knox explained the benefits to the citizen in opening the state's public transport data.

"We thought if we open our data networks to everyone, and literally everyone can have access to them, perhaps they can use our data and find some solutions out of that," she said.

Knox said third parties are companies such as Mastercard, which allows TfNSW to map, in this instance, where money is being spent.

Currently, TfNSW has data use contracts with Google, Amazon Web Services, the Commonwealth Bank of Australia, Mastercard, Optus, Austrade, data analytics software firm Vizalytics, and San Francisco-based City Innovate, which describes its business model as improving efficiency and accountability in government and services for the residents they serve.

"We're also renegotiating our existing contracts, because a lot of them, the companies own the data and they weren't passing it back to us, so we're in the process of renegotiating those at the moment and we're really trying to put ourselves out to industry and have a different way of working so we're running hackathons, events, and challenges," Knox said.