I often see hybrid-electric taxis stopping and going through New York City traffic. Perhaps one day (but not that soon) I'll see a fully electric car among the city's 13,000 yellow cabs.

Over the weekend, NYC Mayor Michael Bloomberg called for more cities to deploy electric taxi cabs in an effort for cities to take up the charge of lowering carbon dioxide emissions. Last month, Bloomberg became chairman of C-40 Cities climate leadership group, which is part of the Clinton Climate Initiative. He said during a C-40 Cities meeting held in Hong Kong:

We've seen, I think again and again, how national governments have struggled, both at home and at the international stage, to take climate change actions. Together, we have to fill the vacuum of leadership ourselves.

Later in a radio address Bloomberg highlights various projects of PlanNYC to cut greenhouse emissions but doesn't mention specific upcoming plans for NYC cabs. He hopes, reports the AP, some of the cities represented in C-40 might be able to work together acquiring and accommodating their electric cab fleets.

San Francisco is already veering in that direction. 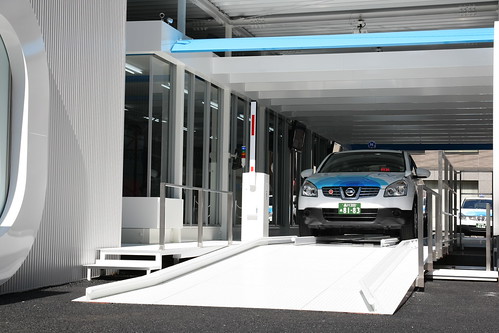 Better Place, a CA-based electric vehicle service provider, recently announced a three-year program to establish some infrastructure for EV taxis between San Francisco and San Jose. To collect as many fares as possible, cab drivers prefer to keep their cars moving. So the project entails four battery switch stations, where the EVs would pull into and swap their battery for a fully charged one. According to Better Place, the switch will take less time than a gasoline fill-up.

In May, they began a similar project in Tokyo (above), home of around 60,000 cabs. Back in New York, should plans eventually solidify, there will undoubtedly be snags regarding infrastructure and adoption of EVs by the cab industry. Last year, a judge ruled in favor of taxi fleet owners who opposed Bloomberg's former rules to replace the city's many Ford Crown Victorias with hybrids within five years. An Appeals Court upheld the decision over the summer.