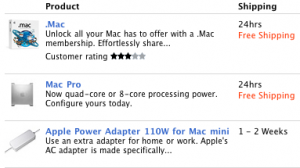 The Apple UK Store accidentally posted a graphic that suggests that new 8-Core Mac Pros are coming soon according to MacRumors.

When searching for "Mac" in the Apple UK Store, the listing for the Mac Pro said: "Now quad-core or 8-core processing power. Configure yours today." The graphic has since been removed.
Rumors have been swirling since October 2006 that Apple would introduce an 8-core Mac Pro using dual Intel Quad-Core Xeon 53xx family processors (code-named Clovertown). Current Mac Pros use Intel Woodcrest cores that are in the Xeon 51xx family.