A long time ago, in a computing universe that seems ridiculously far away (1988), the first version of Microsoft Office debuted. It was literally a bundle of apps that had previously been sold separately, led by the flagship programs Word, Excel, and PowerPoint.

That strategy, with a few important additions along the way (Access, Outlook, and OneNote, for example), served Microsoft and its core corporate customer base well enough for more than 20 years.

And then along came Google, with a suite of online apps that had a fraction of the power of Office but had the advantage of being cheap, accessible, and built for a cloud-first world. 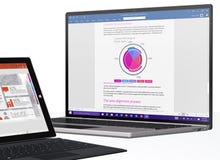 How much does Microsoft Office 2016 cost without a subscription?

Office 2016 for Windows and Macs is available to those who'd prefer to buy it as a single, one-time purchase.

Office 2016 for Windows is still, at its core, a bundle of desktop apps. But the lineup has expanded, the connections to the cloud have deepened, and the capabilities for online collaboration have improved tremendously, enough to neutralize Google's advantages, at least for shops that still build their workflows on the Microsoft stack.

After a lengthy public preview, Microsoft released Office 2016 today. My colleague Mary-Jo Foley has the details, including how to get the latest bits.

My job is to review the new Office release, which isn't as easy as it sounds.

Trying to review a collection of software and services as sprawling as the latest incarnation of Office is a challenge, especially given the confines of online publishing. Instead of delivering a mini-book, I've decided to spotlight what I consider the key changes, so you can decide where to look more closely.

If you're an Office 365 subscriber, you can begin using the new Office today. If you own a perpetual-license copy of Office, you can stay with your existing version as long as it's supported - if you choose to upgrade, you'll pay for the privilege.

At first glance, the bits and pieces of Office 2016 might not look all that different from those in Office 2013. Looks can be deceiving.

There are a few visual cues that make it easy to tell that you're in a new world. The default color scheme, for example, goes back to the traditional Office colors -- blue for Word, green for Excel, orange for PowerPoint, and so on.

I've heard from Office 2013 upgraders who were put off by the stark, blindingly white default theme in Office 2013. Someone in Redmond was listening. The new visual schemes are much easier on the eyes. And the headings on each tab are in mixed case instead of all caps, as before. Here's Office 2013 (top) compared to Office 2016 (bottom).

Probably the most important addition across the Office apps is a box labeled "Tell me what you want to do," which is available on the right side of the ribbon in every Office app.

Unlike traditional help screens, which lead to instructions, the "Tell me..." box leads to commands, hopefully including the one you're looking for. If you can't remember that the Table commands are on the Insert tab, you can just click to the right of the light blub, type "Add a table," and see a custom menu, built on the fly from commands that match your search.

The fundamental capabilities of the core Office programs remain basically the same. But you'll find little touches scattered throughout the collection, including a few that are exceptionally useful.

Anyone who's ever had to attach a file to an email message in Outlook, for example, knows that finding that file is sometimes the toughest part of the job. In Outlook 2016, the Attach File menu leads to a list of recently used files, on the (logical) theory that you probably want to select a file you worked on recently.

Another small but worthwhile improvement is the addition of several new chart types in Excel, including Pareto charts and histograms as well as Treemap and Waterfall charts, extending that program's biggest advantage among data visualization geeks.

Most of the team-based features of Office 2016 were already in Office 2013, but they were scattered and hard to find. Office 2016 does a better job of pulling these disparate pieces together, making them much more prominent in Outlook and reducing the need to switch to web-based views (although the latter is still a useful option).

Office groups, for example, allow teams to build shared workspaces based on projects or responsibilities. Each group gets its own shared inbox and calendar, a shared OneNote notebook, and space in OneDrive for Business to share and edit files. Here's a snippet from one such group that Microsoft created as part of its elaborate reviewer's kit.

All of the Office apps now support shared editing, and the Skype for Business app (previously known as Lync) is well integrated into the individual programs. Team members can also work together using the web-based tools, with an overall experience that is arguably more productive and results in better-looking documents than Google Apps can produce.

On the web, new group-based productivity tools include a Planner, which offers dashboards for measuring the progress of a project and identifying bottlenecks without having to master project management software.

It's been a few years since Office had a major new addition. Office 2016 adds a cool new storytelling tool.

Sway, a modern app (included with Office 365 subscriptions but also available free online), allows you to build interactive presentations from building blocks of headings, body text, and media of all sorts, including pictures, videos, charts, and even tweets.

You put the pieces together, define points for emphasis, and then let Sway turn it into an interactive package for posting on the web. If you don't like the look, tap the Remix button to try a different look.

Taken together, Office 2016 is a worthy free upgrade for anyone who's already an Office 365 subscriber. Even if you never use the team tools, the improvements in usability and extra features are probably worth it.

The bigger question is whether this Office upgrade can win back startups and small businesses that ditched Office for its complexity and cost. It is, after all, still built on the same organizational model as the old one, and it's designed to shine in large organizations with a conventional, even old-fashioned workflow.

The cloud connections and the polish of this release make it a contender, but hardly a sure winner.

Join Discussion for: Office 2016: The Empire strikes back