OK, I get the tablet thing...now I just need the right bag

Once I get my tongue out of my cheek, I'll tell you why.
Written by Christopher Dawson, Contributing Editor. on May 8, 2011

No, really. Adoption of some of the most advanced technology available to consumers really just comes down to the right fashion accessory.

I'm the relatively recent owner of a Motorola Xoom. It's the WiFi-only model and, as so many critics have pointed out, it's still too expensive to make a dent in the iPad empire. It was only January of this year that I questioned the utility of tablets at all outside of niche applications or well-thought-out educational uses. But I needed a light, bright platform for product testing and demonstration for the day job. Our developers were already using Galaxy Tabs, so I figured the larger, Honeycomb-based tablet would make for a bit of diversity.

Not only did it make for a bit of diversity, but I've really grown to like the big tablet. The folks at ZDNet haven't had much good to say about the Xoom and have called Android 3.0 Google's Vista. For me, though, as someone who spends his day online and immersed in Google-ness, the Xoom works very well for me on many levels.

This isn't a Xoom review, though. That's been done. Many times. It's about how we use tablets (the Xoom just happens to be my tablet of choice) and where they fit in to our lives. So how does this relate to Google? Apple has figured out exactly how to convince us that we need tablets in addition to iPhones and MacBooks. Until Google helps potential buyers understand the real value prop behind their tablet offerings, the company will always play second fiddle to Apple (and Microsoft if they aren't careful).

And that's why I need the perfect bag for my Xoom. I have an Android phone that works very well to get me online, keep me in touch, and even read ebooks.  I also have a MacBook Pro and various netbooks (including a Google Chrome Notebook), so I'm not ever searching for a computer on which I can write. Why do I need a tablet, too? Where am I going to put it? And isn't it really redundant to stick it into my laptop bag next to a laptop?

There are plenty of times when I don't even bother taking my laptop. Mobile browsing on my phone gets the job done. And then what will I do? Carry the phone in my pocket and a tablet in a cute little sleeve? Of course, the days I leave my laptop behind, I invariably need to review a document that is barely readable on a 3.7" screen or I need to write something longer than my carpal tunnel-ridden thumbs can handle. A tablet sure would be handy then.

Like I said, I get the tablet thing. 10" of screen real estate lends itself wonderfully to reviewing or updating spreadsheets, reading long documents, taking notes, and organizing and accessing content. There are a whole lot of things that one can do easily on a tablet that are fairly painful on a phone. But I need the right bag. I need a bag that begs me to just take the tablet with me. No matter what, when I walk out the door, I grab the bag/tablet, my phone is in my pocket, and there's virtually nothing I can't do at a fraction the weight, bulk, and theft worry compared to my full-blown laptop (in, of course, a full-blown laptop bag).

I can put my tablet in my Scott eVest, but no matter what he says about weight distribution, it's just too bulky. It's also not protected enough for my tastes. I want to have my tablet available to me all the time. I use it all the time at home or in my office, but working remote, it's either my phone or a laptop since the tablet just isn't quite portable enough (at least not in the way a phone is).

Next: So what's a hyperconnected guy to do if he doesn't want to carry a laptop all the time? »

Nope, I can have my cake and eat it too, relying on my light, snappy tablet while I'm out and about, if only I just had a convenient enough bag.

I know, it sounds stupid, but really, there aren't many of us who don't at least briefly wonder if we'll use that tablet enough to justify the cost. Give us a bag, though, that holds just the right amount of useful stuff and our tablets (nothing more, nothing less) then it's easy for the tablet to become a constant companion, much like our phones, but more capable.

I ordered a cheap "Rothco Urban Explorer" messenger bag from Amazon tonight because the cool leather messenger I really wanted cost half of what I paid for the Xoom. In theory, this thing could hold my phone, my Xoom, my wallet, necessary power cords, and a book (and even a couple diapers). These are all the things I unsuccessfully try to cram in my cargo pants most days. We'll see if the new bag cuts the mustard. 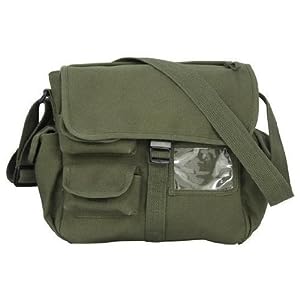 This is actually what Google needs to show it's customers: A $15 bag for us guys or a decent-sized purse are all you need to carry a sophisticated keyboard-less computer with you all the time. You don't need to decide. You just need to be online, browsing better than you could on a phone and even creating content in ways that phones just can't support. One little bag and you can do this all the time. And laptops? Who needs laptops when you have the cloud and a tablet, right?

Apple doesn't need to show anyone this: Apple geeks are going to buy iPads in droves because Apple makes them.