One More Look at Pinguy - on Netbooks This Time

I've had ten days or so to look at Pinguy now, so I want to write a sort of "wrap-up" for my own purposes at this time. I will not be using it as the default or preferred distribution on any of my systems, because there are a few too many things about it that I don't care for.
Written by J.A. Watson, Member blogger on Jan. 9, 2011

I've had ten days or so to look at Pinguy now, so I want to write a sort of "wrap-up" for my own purposes at this time. I will not be using it as the default or preferred distribution on any of my systems, because there are a few too many things about it that I don't care for. The biggest of those is the fact that it is heavily dependent on Mono, for the "docky" package and a few others. By the time I extract mono and the packages that depend on it, I'm left with something that is certainly no better than Linux Mint, PCLinuxOS or SimplyMEPIS. That is not to say that it isn't a very good and very interesting distribution, and those who do not have moral or philosophical objections to Mono could very well find it extremely attractive. However, another area where I think it falls short is netbook support, so that is what I will examine here.

I have loaded Pinguy on three of my netbooks - the Samsung N150 Plus, the Lenovo S10-3s, and my trusty HP 2133 Mini-Note. That last one turned out to be quite a struggle, but I finally got it. Interestingly, the problem was that Pinguy includes more in their Live image than most distributions; specifically, they include the firmware for Broadcom b43 wireless networking cards. The b43 driver is a major headache in the HP 2133, frequently hanging the entire system and requiring a power cycle to recover. So it was hanging every time I tried to install Pinguy on the 2133, and because I'm not used to Broadcom support in a Live image, it took me a while to figure out what was happening - I was actually starting to think that my 2133 might be dying, which would be very depressing. Once I realised what the problem was, all I had to do was "sudo modprobe -r b43 immediately after booting the Live image, and then had no problem running the installation. (By the way, I just had the same problem with Linux Mint Debian Edition as well. Small world...)

As I have said before, one of the biggest limitations that you have to deal with on a netbook is the display size. Most are WSVGA resolution, 1024x600, which isn't much space, particularly in the vertical axis. Pinguy has several things that I think need to be adjusted to allow for this - the top Panel, the bottom Docky panel and the Conky display. Here is a screen shot from the Samsung N150, which shows this: 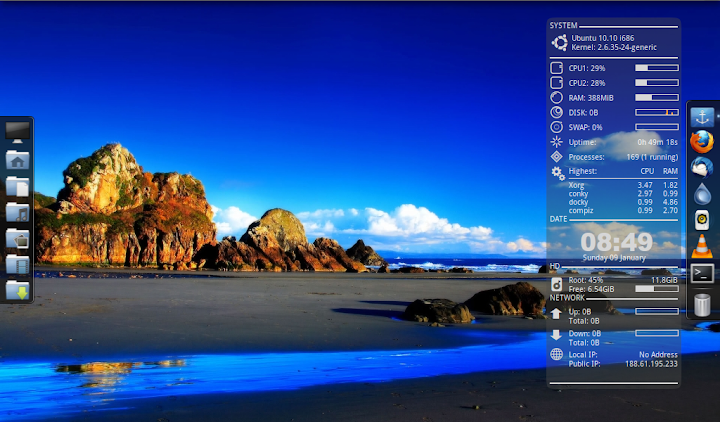 This view shows what I have done to adjust Pinguy for the netbook. First, I have enabled autohide on the top panel (right click the panel and choose Properties. Then, move the bottom Docky panel to the right side of the screen, which I prefer because there is a lot more horizontal space than vertical space available. This can be done by simply clicking the Docky icon on the bottom panel (the one that looks like an anchor), and then dragging the bottom panel to the right side of the screen. So, now I have the full height of the display available - all 600 pixels of it... I have also reduced the width of both Docky panels from 48 to 36 pixels, which is again done through the same Docky icon and control panel. I have also enabled Intellihide on the Docky panels, so they will be hidden whenver they would overlap with an active window. Finally, I have moved the Conky display slightly to the left, so that it does not overlap with Docky, and I have reduced the size so that it fits entirely on the screen, by simply removing all the blank lines in it. Although the result is not bad, I still don't think it is particularly nice, and it still feels like trying to cram five pounds of stuff into a three pound sack.

Pinguy looks quite a bit better on the next netbook, but that is because this one has a much higher resolution screen than the Samsung. This is on the Lenovo S10-3s, which has a 1280x720 resolution. 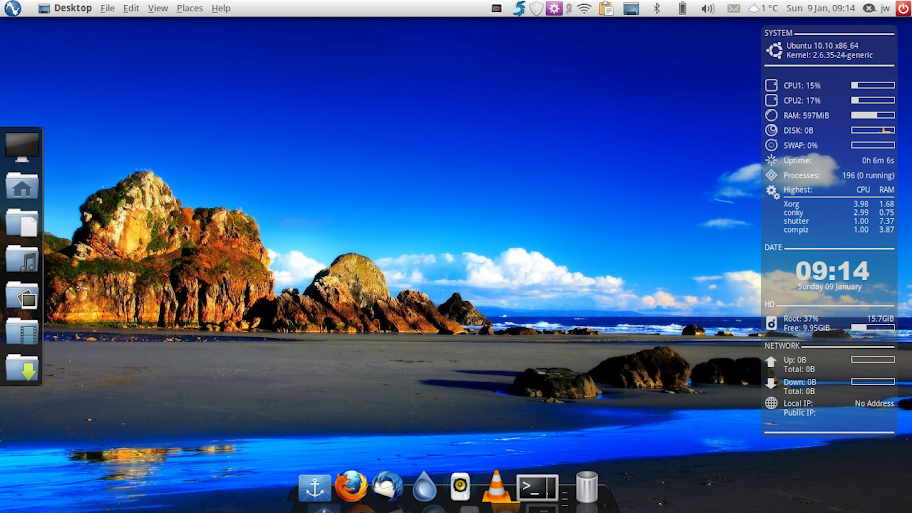 I know that these to screen shots look very similar, but pay particular attention to the relative size of the Conky display, and the size of the Docky panels. I have not reduced those panels on this system, they are still the default 48 pixels. Also, notice that the bottom panel has the "3D" effect on, which makes for a nice look. This effect can only be enabled on top/bottom panels, not on left/right, so I couldn't use it at all on the Samsung above. Although the top panel is visible in this view, I still normally auto-hide it not only to recover the screen space, but also to reduce the clutter on the display. I also have Intellihide enabled on the Docky panels, again to reduce the clutter on the desktop when I am working on something else. I think that even though the difference in display resolution is not that large, the overall appearance is considerably nicer on the Lenovo netbook.

Finally, here is Pinguy on the HP 2133 Mini-Note. Once I got past the problem with the Broadcom wireless adapter, I still had to deal with the VIA Chrome9 display controller. The good news is that Pinguy includes the openchrome driver (of course, because it is derived from Ubuntu); the bad news is that this driver does not include any advanced graphic acceleration or 3D support. I was pleased that Pinguy would at least install on the 2133, but it warned on the first LiveUSB boot that the graphic support was limited, and most of the special features and effects of Docky would be disabled. Basically what you get is no option for 3D effects on the Docky panels, no inflating/bouncing of the icons when you move across them or select them, and no transparent/translucent effects on the panel backgrounds. Here is what it looks like on the WSVGA (1024x600) Mini-Note: 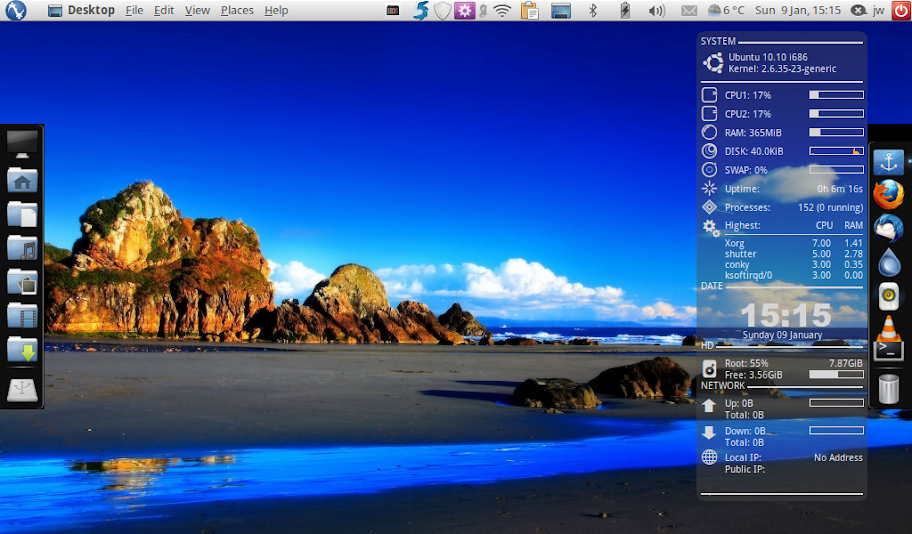 Note the dull monotone of the Docky background and the lack of rounded corners on the panels. Nothing happens in those panels at all, ever - they don't react at all when you move over them, nor when you click to select one. You just have to be patient, believe that you did indeed click one, and wait for the application to start. It is not even possible to enable hiding for the Docky panels, so you are stuck with them covering that much screen space all the time. You can, of course, reduce their size - they are 36 pixels as shown in this shot, but they can be as small as 24 pixels. Oh, and you can enable autohide on the top panel, as usual.

A couple of other points about Pinguy on the HP 2133. I mentioned the Broadcom problem above; in order to get WiFi working after installation you have to go into the Additional Drivers utility, remove the b43 driver, and then enable the STA driver. Also, it developed some serious problems after installing the latest updates. All of the folders disappeared from the left Docky panel, and I couldn't figure out why or how to get them back, and even the Broadcom STA driver wouldn't work for WiFi connection any more. I find it very surprising and confusing that neither Ubuntu nor Linux Mint showed these kinds of problems when patched up to date.

So, considering the fact that I don't want to use a Linux distribution that depends on Mono, and that Pinguy doesn't adapt particularly well to netbooks, I will not be making much use of this distribution. If you do not object to Mono (and I know a lot of people don't), and you have a full-size laptop or desktop system, you might feel quite differently about it than I do.