The Linux Foundation has embraced an open source architecture for drones. That could mean a replay of the 1990s for enterprise adoption.
Written by Greg Nichols, Contributor on Aug. 25, 2020 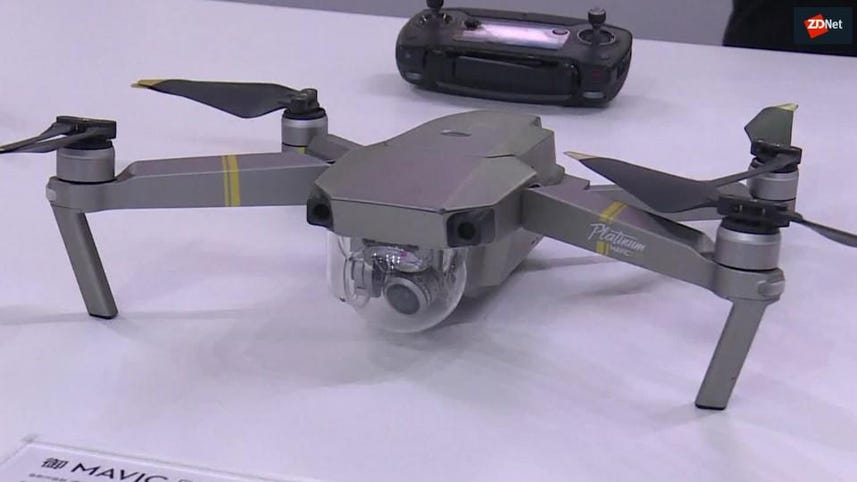 The drone industry has reached an inflection point, with a handful of companies (think DJI and Amazon) dominating the industry. As a result of the reigning monopolies, it's nearly impossible for any single company to compete against overwhelming market share, along with an inability to easily scale and the fact that companies need to essentially reinvent the wheel to innovate.

But that's changing, and in a way that may be familiar to ZDNet readers who witnessed the open source revolution in enterprise computing brought about the likes of Red Hat in the early 1990s. In today's drone landscape, an ecosystem of companies is working together to compete, supported by the government and powered by open source. No single aerospace or drone company can do this alone, but together there's every indication of a new chapter in drone development and competition.

One company helping drive and orchestrate this change is Auterion, a drone software platform built for enterprise that's based on open source software and adopted by the Linux Foundation. I caught up with Auterion cofounder Kevin Sartori about the current transformation underway, the parallels to personal computing, and the power of open source when it comes to ending software hegemonies.

GN: Help dissect the comparison between the drone space and personal computing when it comes to development ecosystems and the evolution of the market of proprietary versus open source operating systems. Is it an apt comparison?

Kevin Sartori: Currently, the global drone industry is fragmented but is undergoing a clear consolidation life cycle, as most newer industries do. What's happening now in the drone industry is not unlike what happened in the personal and enterprise computing space in the early '90's. When Red Hat came around in 1993, there were a handful of proprietary standardized server operating systems available for enterprise and government users. Red Hat was a pioneer in using open source technologies to create enterprise software, and soon Linux killed off proprietary operating systems like Sun Microsystems' Solaris. The open source model provided customers the ability to customize the applications to their use cases at a fraction of the cost of proprietary systems. Modern drones are increasingly software-defined and are comparable to flying servers. Auterion is following the Red Hat model by providing an enterprise operating system for drones based on open source software, and is seeing enterprise and government customers alike making the transition from drone solutions based on proprietary software to the open source model.

GN: What has the adoption curve been like for open source in the drone world?

Kevin Sartori: The drone industry's open source journey started in 2008, when Dr. Lorenz Meier started a research project alongside his master's degree at ETH Zurich with 14 fellow students. The goal of the project was to fly drones autonomously using computer vision. The team came to be known as Pixhawk, and soon their open software was being adopted by other users. Communication protocols and user interfaces like MAVLink and QGroundControl were incorporated into the framework, and after a few rewrites the Pixhawk team released the flight control software that is now known as PX4 in 2011. The PX4 ecosystem has since grown to more than 10,000 users with more than 750 contributors and is now the most widely used open source drone autopilot operating system, with an estimated one million drones flying today on the technology.

In 2017, I partnered with Lorenz to start Auterion, a company focused on maintaining the core PX4 open source technology and packaging it together to be easy to use for enterprises. In 2018 we released Auterion Enterprise PX4, an open source drone operating system, and in 2019 we expanded our platform to power a diverse range of vehicles, including multicopter and VTOL aircrafts, as well as ground vehicles.

Today, our software platform powers the drones of some of the leaders in the industry, with new use cases being added all the time. For example, GE Aviation is relying on our technology for drone systems that require higher safety standards and certification by regulators, including delivering emergency goods with large drones and healthcare providers shipping critical drugs within urban areas. Our partner, Quantum Systems used open source technology to show the world what scalable medical deliveries in urban areas will soon look like by delivering COVID-19 test samples over downtown Munich to a hospital outside the city. Government organizations are taking notice too; last year the Defense Innovation Unit (DIU) announced a $2 million project with Auterion to enhance its open source drone software, a project that has since been renewed by an extension contract. Auterion's Enterprise PX4 platform will help standardize the operating system for different drone models, with the aim to one day power the Army's entire fleet of small unmanned aircraft.

GN: What are the advantages of an open source approach for competition and development? Why is this important for drones in particular?

Kevin Sartori: China took an early lead in the drone market with DJI now being the largest maker of commercial drones in the world. DJI controls 75-80% of the small UAS market, however, a reexamination is happening in the global drone market and major enterprises and governments are looking to alternatives for their DJI-manufactured drones.

While some drone companies are focusing on proprietary technology in order to compete, we believe no single company can challenge DJI's monopoly. There is a clear market need for a common operating system for commercial drones, and the lack of a unifying standard leads to complications with interoperability between drones and services - key components of any scalable drone program. Open source standards help drone service providers and manufacturers focus their limited resources on differentiators, rather than having to reinvent the wheel building underlying infrastructure. This in turn lowers overhead costs and ultimately drives more democratic competition based on pure innovation, not resources.

Open source drone technology is ideal for enterprise and government partners alike because the code is fully auditable, providing peace of mind in the age of increasing concern about data privacy and other security issues. This level of transparency is invaluable for organizations like the US Defense Department and leading enterprises who rely on standardization and interoperability. Auterion is a core driver of open standards in the drone industry. The company was responsible for more than half of the 1.5 million lines of code contributed to PX4 in 2019, and both Lorenz and I are board members of Dronecode, a vendor-neutral nonprofit hosted under the Linux Foundation supporting open standards. It is becoming more and more clear that drones powered by open source software will outpace proprietary systems in terms of innovation. .

GN: How do you see the ecosystem of companies using Auterion chipping away at the market share of the industry's giant players? Will they always be nipping at the heels, so to speak, or do you see a possible inversion or inflection point sometime in future?

Kevin Sartori: As we discussed earlier, the global drone industry is already at an inflection point. The market leader is struggling with ongoing security concerns and governments are taking action. Congress recently introduced the American Drone Security Act that will prevent federal departments and agencies from purchasing commercial off-the-shelf unmanned aircraft systems manufactured or assembled in countries linked to national security concerns - namely, China. These kinds of sanctions are creating a multibillion dollar market opportunity that many UAS manufacturers are aiming to capitalize on.

Assuming the UK and Europe follow the US' lead and ban the use of Chinese-made drones for government use, there will be a significant demand for more transparent and standardized alternatives. Governments would rather invest in an ecosystem than individual companies - just look at the ongoing antitrust litigations hoping to avoid creating new monopolies - which makes Auterion and the greater PX4 ecosystem a favorable investment.

With governments showing a renewed focus on reducing dependence on Chinese-made hardware, private enterprises are also feeling pressure to invest in alternative manufacturers. While there's currently no legal reason for enterprises to avoid purchasing their drones from China, the risk of potential issues being discovered later on is incentive enough for procurement departments to avoid investing in technology from Chinese companies altogether. In short, whatever technologies the government decides to back or avoid, enterprises will soon follow in suit.

The ongoing COVID-19 pandemic is also changing the way the drone industry operates. In short, there is a lot of pressure on government organizations and private enterprises to decrease costs and increase efficiencies. Automation is of course one way to address those issues, but investing in standardized technology is another way to avoid reinventing the wheel. We see a number of parallels between the drone industry during the 2020 pandemic and the enterprise computing space in the late '90s.