Last week, Netflix announced its planned launch in Australia on March 24, and iiNet and Optus announced that customers accessing the video-on-demand service on their home internet would not have Netflix counted towards their monthly download quota.

Now, Optus has announced that it will offer customers signing up for new contracts, or re-contracting with Optus between March 24 and July 5, a six-month Netflix subscription. 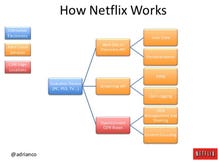 The biggest cloud app of all: Netflix The largest pure-cloud play service of all is based on Netflix's open-source stack running on Amazon Web Services.

"We know that while many Australians prefer to watch their favourite TV show or the latest movies from the comfort of their home, they also want portable content for their smartphones. With our subscription offer, we're giving customers all the entertainment they need in the one place, and the freedom to watch what they want, when they want it.," Optus CEO Allen Lew said in a statement.

Fixed-line customers can access Netflix through the second-generation Fetch TV set-top box, and the unmetered Netflix comes into effect from April 17.

Data charges still apply for mobile customers, however, and Optus has warned that standard-definition Netflix will use 1GB of data per hour.

It is still unclear how much Australians will pay to access Netflix, with the company stating that more will be revealed at the time of launch.