REDWOOD CITY, CALIF.--- Oracle announced a major update on its cloud business at corporate headquarters on Monday as the tech giant aims to dominate another market (and topple a well-known rival) by year's end.

Oracle chairman and CTO Larry Ellison said that with Monday's announcement, the company has filled in the last of "our major blocks" for its cloud portfolio.

"We now have a complete suite of services for building applications in the cloud," said Ellison, promising customers can now take all of their applications -- even if they are third-party or custom-made -- out of their data centers and put them in the Oracle cloud "with the push of a button."

Ellison called out compute, in particular, admitting it has been a bit of a gap until now. Oracle EVP Thomas Kurian elaborated further on the new dedicated computer cloud service, which can run any legacy Oracle, third-party or bespoke app.

"When you move an application or a database from on-premise to the cloud, it doesn't just get cheaper and easier to use because you're in the cloud now. It automatically modernizes itself," Ellison elaborated. "We compress the data by a factor of 10. We encrypt the data. We make the applications multi-tenant. You don't change a single line of code."

The Oracle Cloud is also now advertised to be 100 percent upward compatible with the technology Oracle offers on-premise, meaning users should be able to move workloads between on-premise reserves and the public cloud.

"Everything is not going to move to the cloud by Friday. It's going to be a very a long process," Ellison admitted, estimating such endeavors for upgrading, moving and managing workloads in hybrid environments will take at least the next decade.

Never one to shy away from calling out industry competitors, Ellison outlined how its field of software competitors have changed, going from primarily SAP and Adobe to Workday and Salesforce.com.

"They are not a bookstore only anymore," Ellison quipped about Amazon.

The company founder and former CEO stressed a key component to Oracle's ongoing cloud strategy is to develop everything on industry standards, whether that's the Java language or OpenStack. He added all of Oracle's SaaS apps are social by nature, making them "modern" and encouraging collaboration among teams.

"We have more applications than any other cloud services provider by a huge margin," boasted Ellison, who touted Oracle offers "all three tiers" of cloud services, insisting Amazon Web Services only offers one while Salesforce has two. 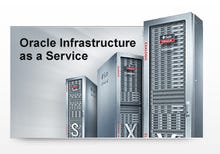 Oracle: Can it really sacrifice margin for commodity cloud? Oracle says it'll be price competitive with AWS, Microsoft Azure and Rackspace. Is infrastructure as a service really a gateway to buying Oracle's cloud applications?

Wall Street was looking for earnings of 87 cents per share with $10.95 billion in revenue.

That's down five percent from the year-ago quarter, but Oracle asserted it would have been up three percent if not for "the strengthening of the U.S. dollar."

Still, perhaps a slowdown in new software licenses should get more of the blame as they dropped 17 percent year-over-year. Software and Cloud revenues for the quarter totaled $8.4 billion, down six percent but up two percent in constant currency.

Oracle attracted 1,217 new customers during the fiscal fourth quarter, with Ellison asserting Oracle Cloud is "growing much faster than" Salesforce or Workday.

Once again, Ellison reiterated Oracle's goal to achieve between $1.5 billion to $2 billion in new Software-as-a-Service (SaaS) and Platform-as-a-Service (PaaS) bookings by the end of this fiscal year, aiming to surpass current leader Salesforce.com.

"It's not going to be easy, but we're going to try," Ellison said.

"We have filled in all of our boxes," Ellison remarked. "I'm not saying we're not going to continue to improve things, but all the major pieces are there.""