Full Bio
Posted in Between the Lines on October 4, 2011 | Topic: Enterprise Software

Oracle cancels Salesforce.com CEO Marc Benioff's keynote at the OpenWorld powwow as the two companies engage in what appears to be a pro wrestling match.

But like a pro wrestling match I'm not quite buying the story here. The storyline on Wednesday and Thursday went like this:

In other words, Ellison and Benioff deliver a replay of last year. Benioff talks up his cloud case. Ellison talks hardware. Most Oracle customers really want to know what's up with Fusion deployments and any potential pain ahead. Anyone want to bet that Ellison recycles a few lines from last year? 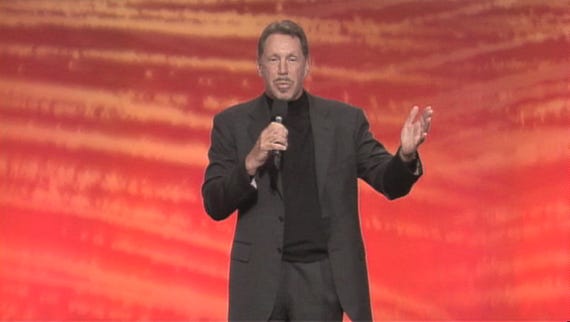 While the customers that actually buy Oracle's wares are distracted, the crowd goes wild. Arik Hesseldahl at AllThingsD says:

It wasn’t for nothing that Oracle, which does a significant business in Customer Relationship Management — or CRM — software, advertised heavily around the time of Salesforce’s recent Dreamforce conference. Salesforce, as we all know, does CRM in the cloud, and has a lot of momentum behind it of late. This could just be Larry Ellison’s way of expressing his unhappiness with Benioff.

While at first saying he was mystified as to why Oracle would bump his million-dollar appearance, Mr. Benioff later said he got scrubbed “because Sunday night was such a disaster. Larry was not prepared. The keynote was panned in the blogs and in the on Twittersphere. There was concern that we would put on a better presentation. You don’t have somebody over to your house to tell better jokes than you.”

Oracle reschedules Marc Benioff, CEO Salesforce.com’s keynote to some g-d awful time of day, which Benioff flips to having been cancelled. Nice when you can get away with it and of course the media are all over the story like a dose of wildfire clap.

Of all the bush league things that could be done, this is a topper. If you thought the days of animosity and dirty tricks was over in Silicon Valley because we had somehow grown up — or at least aged out of it — tonight is a sobering reminder that they play by bare knuckles rules out here.

Am I really supposed to buy the storyline that Oracle booked Benioff thinking he wasn't going to mention false cloud at least 30 times? Benioff's Exadata as false cloud slide is a staple in his talks. We'll overlook that Benioff runs Oracle databases and has a ton of Dell servers in the background.

Add it up and this Benioff keynote cancellation is good theater and nothing more. In the end, I think the industry is being played as Ellison and Benioff duel to see who has the most attendees at OpenWorld and Dreamforce respectively. Like a pro wrestling match the ring---in this case San Francisco's Moscone Center---isn't big enough for the both of them.