A couple of thoughts on the large scale Oracle OpenWorld Conference, which has a downtown San Francisco street closed, over 40,000 people in attendance and 1,700+ sessions.The logistics of catering to this number of people is huge, and so is the associated airlift.
Written by Oliver Marks, Contributor on Sept. 23, 2008

A couple of thoughts on the large scale Oracle OpenWorld Conference, which has a downtown San Francisco street closed, over 40,000 people in attendance and 1,700+ sessions.

The logistics of catering to this number of people is huge, and so is the associated airlift.

I wrote about the blurring of lines between 'live' conferences and the online back channels, video feeds and associated external conversations in Twitter, blogs and of course journalism back in June, musing on the old gigantic Comdex conference in Vegas.

Channel negotiations and business deals aside, many conferences are attractive for gathering consensus in vertical industry spaces, an important form of collective collaboration. The web 2.0 movement is a good example of this, but some would say conferences in this space are more an opportunity to congregate and take a snapshot of a moment in time in a rapidly changing world, rather than to formulate new thoughts.

What’s intriguing to me is that increasingly the online conference community back channel, Twitter and blogs are as important as the live presentations at conferences. Frequently the discussion is more lively online than onstage even as a session is running, and sometimes online and live merge with questions posed electronically being discussed on stage.

Given how tec-savvy the average Oracler is, regular online sessions delivered monthly might be more digestible than picking your bets from 1,700 live sessions in one huge binge. I'll be asking people this question at the conference...

Capturing insights before the conference

Oracle have done a great job of starting to make this shift - before the conference the front page of oracle.com looked like this: 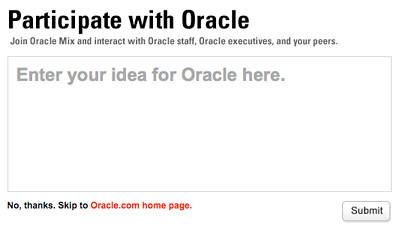 Oracle openly solicited ideas which were captured in their 'Mix' Network, which appears to be a very solid community environment. I think it's genius to capture ideas and insights before a huge conference like OpenWorld, and from the conversations I had with Oracle folks yesterday uptake was great. This is clearly a popular idea based on my my straw poll chatting with attendees - I can see this environment really taking off for Oracle.

Having an 'Ideas' UI button and section in a social media application is a terrific idea, and could be a powerful tool for many other businesses - and for companies exploring innovation within organizations such as Imaginatik to incorporate into their discovery processes.

The Mix network appears to be essentially ThoughtWorks with some tweaks/integration by Oracle AppsLab.

A combination of this and the recently announced Beehive would be really something...in fact I think a lot of people were expecting Beehive to be more like the Mix Network...

Although I'm in San Francisco events have unexpectedly conspired to prevent me spending as much time physically at the conference as I'd like. It's fascinating to follow events on live blogs such as developer Eddie Awad's site, watch video feeds and follow the twitter stream (which is how I found Eddie).

The differentiator to physically being at the conference is getting context, nevertheless it's amazing how much you can get from paying attention remotely. It also sets you up well for when you arrive at the live event, which I am now going to get back to.