Editor's note: This article has been updated from the previous version to reflect corrected copy and a new video.

This weekend, I was lucky enough to be one of the few that was able to secure an iPhone 5s, and I needed a new case to put on it. But as with any new device coming out of Cupertino, the issue of adequate protection versus how much aesthetics one is willing to compromise comes into play.

I've always been a big fan of OtterBox's Defender Series cases, regardless of which OEM device I happen to be using. In my opinion, they are the gold standard of device protection, with their polycarbonate clamshell, permanent screen protector, and rubber anti-shock covering.

Their products have saved me headache and heartache on multiple occasions when I've had a "whoops" moment due to an accidental slip or drop.

Even with accidental damage coverage such as AppleCare+ or Asurion plans offered at carriers like Verizon, device repair and replacement can take days, and the process is aggravating as well as potentially costly due to the temporary interruption of business that occurs between replacement of the device.

Additionally, such plans, particularly AppleCare+, still involve a per-incident repair cost. So having a protective case is still a very good idea.

The new Defender Series, as well as the Commuter Series, completely redesigned for the iPhone 5s and 5c, are both good cases, but I have some concerns (albeit relatively small) that the products are no longer as protective as they were previously. 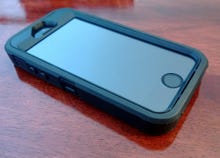 The new OtterBox Defender and Commuter case lineup for the 2014 iPhones.

In both the the Defender and the Commuter, OtterBox has forgone the ugly, bulky design of previous products (a design choice that I felt was necessary to preserve its protective qualities) in favor of a thinner, more aesthetically pleasing design that closely matches the actual industrial design characteristics of the iPhone.

The new Defender and the Commuter have the same polycarbonate clamshell and rubber coating, but the thickness of the polycarbonate and the rubber appears to have been reduced in certain impact-prone areas. In order to accommodate the new fingerprint sensor on the iPhone 5s, a cut-out has been made in the permanent screen protector.

While the Commuter has always been the less-protected option between the two products, the Defender case for the 5s now has reduced bezel protection on the home button area than in the previous design for the iPhone 5.

In fact, the home button area has no bezel at all.

If you're not looking carefully, the Commuter can be easily confused with the Defender in the new 5s and 5c designs, a mistake I actually made in an earlier version of this review. The difference between the two products is minor, in that the Commuter has rounded corners and a contoured back, whereas the Defender retains its largely squared-off design.

Truthfully, if you are going to put a big plastic and rubber black case on your iPhone, you might as well go with the Defender to get the extra protection. I'm not seeing a huge aesthetic difference between the two products in this iteration.

The evaluation sample of the Defender was sent to me in the standard black-on-black color, which sells for $49.95. Other more aesthetically pleasing color combinations can also be ordered directly from OtterBox for approximately $59.95, but as this is a new product, there may be shipping delays on the custom color versions. 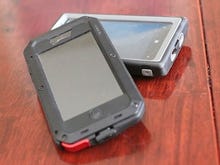 Customize your own Moto X? A Lumia 920 in your choice of fab plastic? Or perhaps a new iPhone 5C? Meh. I need something that can withstand the rigors of daily business and travel without putting an ugly, bulky case on it.

As with previous Defender products, the new 5s version also comes with an optional holster clip, which can be used to completely cover the screen face when being carried. I find that this adds a nice layer of security when the phone is in my pocket or it is being tucked in a piece of carry-on luggage and the potential for being bounced around along with other objects that can potentially scratch or damage the screen is high.

While I happen to like the new OtterBox Defender and Commuter for the 5s and 5c, and applaud the company's initiative to make its products less bulky for the majority of consumers that want to preserve the aesthetic properties of their iPhone as much as possible, I'd still like to see it release an Armor Series for the 5s and 5c for those of us who want that extra piece of mind.

Are you planning to pick up the new OtterBox for you new iPhone? Talk back and let me know.