When Nokia announced its first piece of hardware since selling its handsets business to Microsoft, a few eyebrows must have gone up. Nokia's products have traditionally been mass-market, consumer devices for established industries -- and Ozo was anything but.

Announced in July, Ozo is a virtual reality camera for film and media professionals -- a silver, spherical piece of hardware that some wags have pointed out bears more than a passing resemblance to the Star Wars light saber-training droid. With eight cameras capable of capturing 2K video, the Ozo records both 3D images and sound 360 degrees, to be outputted on VR systems.

It's not the first piece of hardware to launch under the Nokia brand after the handset unit sale -- Foxconn makes and sells the Nokia N1 tablet under licence, and phones are expected to follow through a similar model -- but it's the first device that Nokia has made itself.

So why did Nokia enter the digital media market? According to Paul Melin, Nokia Technologies' head of digital media, the idea for the Ozo came from company engineers who pitched the idea to management.

Nokia says no return to handsets as CEO lays out its plans for the future With the Microsoft deal now behind it, Nokia is setting out the strategy for its three remaining businesses.

"This was not the result of some kind of corporate planning process where we envisioned that we wanted to enter virtual reality and set up a team to come up with a product.

"This was much more a result of a bottom-up process -- individual engineers coming up with an idea, proposing it to management and getting encouragement, funding, and developing the concept further. This was very much an entrepreneurial activity... Once we started to see the potential, we really wanted to double down on it and turn it into a full-blown initiative," Melin told ZDNet.

It might not seem like the most obvious new kit for the company, but look a little harder and you'll see Ozo's roots go back a long way -- Nokia's research centre has been working on the fields of video coding, audio quality and imaging for some time. It's also using its background in hardware manufacturing to build the Ozo close to home -- the device will be made in Nokia's home turf, Finland.

The mass market hook is there too -- the company believes that VR will become ubiquitous on phones. "We see this as the birth of an entirely new media. We don't see it as a niche market where the audience would only consist of gamers and owners of virtual reality consoles, but everyone who has a mobile phone is a potential consumer of this content," said Melin.

Ahead of its official launch on November 30, Nokia has been demoing the Ozo at Slush, the Nordic region's biggest startup event, this month. Visitors to the Helsinki show were able to view content captured on the device on VR headsets, from a short comedy clip set at a wedding to some video of NASA's astronaut training centre in Houston, preparing to dive on the organisation's underwater replica of the International Space Station.

As well as making the Ozo hardware and the software that powers it -- which stitches together the sounds and images from the eight cameras -- Nokia is "also providing tools throughout the value chain from postproduction to consumption," Melin said. The aim is to make the system as widely compatible with other platforms as possible, so established media companies and upstart film studios alike can fit it into their existing setups and "produce content on muliple platforms on their own terms".

Of course, not every video scenario is suitable for 3D virtual reality. "Because storytelling conventions for VR are at the very early stages, we don't think full-blown movies or long experiences will be at the forefront of the development. It will be much more about telling the background story, visiting places, having this additionally compelling content," Melin said.

To put it another way, you'll always want to watch Apocalypse Now just how Francis Ford Coppola put it together, but a tour of the set filmed on an Ozo might give you another perspective on how the movie was made.

"In the area of digital media, we are very focused on virtual reality but not only on that," Melin said. "The main thinking in our focus is that we want to be the 'reality' part of 'virtual reality', capturing the engaging and emotional experience." 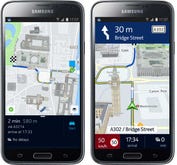 Nokia expands HERE mapping to broader Android market The HERE beta for Android expands beyond Samsung devices, but there is some friction with the distribution plan.

As well as allowing filmmakers to capture entertainment and news, the Ozo could even be used to let people "relive the important moments in their lives". It's not a huge stretch of the imagination to visualize a future where wedding videos are filmed in 3D, for example.

But does that mean that one day capturing VR could be as commonplace as taking selfies is now -- instead of snapping a duckface with a smartphone, we'll soon be using that same device to capture immersive 3D film?

"We do see the development that people will record 360 video, maybe even with their mobile phone -- if not full 360, then at least wider-angle. That's going to happen. And people will want to capture the audio scene in 3D -- the difference when you have captured the full audio scene is much more engaging," Melin said.

Though it dates back to the 1990s, virtual reality feels like a market still in its infancy -- many of tech's big names are making consumer headsets, but they're far from perfect and there's not much in the way of compelling apps for them yet. Analysts have yet to agree on the VR market's future worth, however estimates vary from a modest $16bn to $30bn by 2020 (and even up to $150bn if you include augmented reality too).

Given the uncertainty over the strength of VR's appeal in the short term, it's perhaps no surprise that when Nokia first unveiled the Ozo, it made clear that it had ambitions beyond that one device. The Ozo is, according to Nokia Technologies' original announcement, "the first in a planned portfolio of digital media solutions" from the company.

Join Discussion for: OzoMG! Why Nokia chose a virtual reality...