After a longer than expected wait, a new release of PCLinuxOS KDE is available, this one called 2011.6.
Written by J.A. Watson, Contributor on June 28, 2011

After a longer than expected wait, a new release of PCLinuxOS KDE is available, this one called 2011.6. When the first releases of PCLinuxOS 2010.7 were made last fall, the word was that there would be a new "rollup" release every three months. It looked like they might stick to that commitment when that release was followed by 2010.10 and 2010.12 (even a bit ahead of schedule). But things happen, there were some disturbances in the distribution chain, and we missed out on one release. But now they are back on track with this new release, and from what I see in the download directory there is probably more to come in the near future.

Don't forget that PCLinuxOS is a "rolling distribution", so this hasn't been like a lot of others where we have been sort of "stuck" waiting for a new release to get our hands on the latest versions of a lot of packages. If you already had PCLinuxOS 2010.x installed, and you have been keeping it updated, then you actually have the same thing that is in this new release, and there is no reason for you to reinstall it (unless you want to start from a "clean" installation periodically). The situation where this new release is important is when you want to do a new installation. I can say from experience that installing PCLinuxOS 2010.12 and then getting all the updates was not much fun. It was still about a hundred times faster than installing any version of Windows today, but that's not a fair comparison... Anyway, if you are going to be installing PCLinuxOS, or you keep the installation media handly "just in case", you should pick up this new distribution.

Installing this release is essentially the same as with previous releases. Check the PCLinuxOS Web Page for the release announcement, links to download mirrors and torrent sources, and installation tips. As with the previous releases, it is compatible with unetbootin, so it is easy to convert the ISO distribution to a bootable USB stick. The installer itself has been improved a bit since the last release, so it is a little nicer looking in general and it works better on netbooks with limited resolution. The installation process is quite fast. When you reboot the installed system, this is what you get: 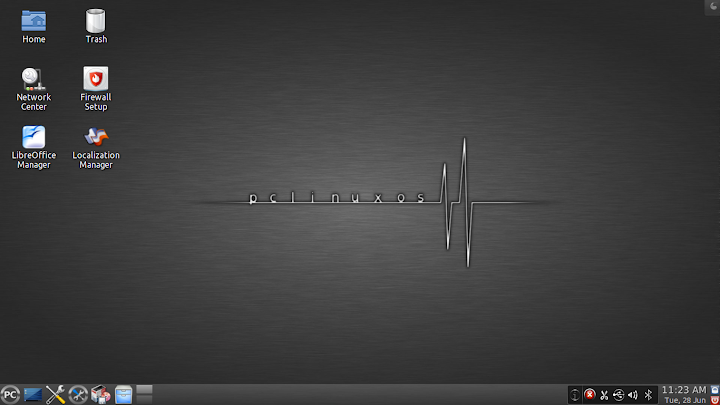 Of course, every new release has to have new artwork, and PCLinuxOS is no exception. I think that I prefer the 2010 wallpaper to this one, but I don't have any significant objections to the new one. Oh, and I rather like some of the new sound effects.

As mentioned above, there are some good "post-installation tips" on the PCLinuxOS web page, so be sure to look at those. One thing that is pointed out there, at least indirectly, is that like nearly every other distribution they have switched to LibreOffice, but the actual packages are not included in the base distribution. This is not a bad choice, as it keeps the LiveCD size down (by quite a lot), and as you can see in the screen shot above there is a LibreOffice Manager icon on the default desktop. Click that icon and it will install LibreOffice for you.

So far I have only installed this distribution on two of my netbooks. Here are a couple of quick notes I made during the installation:

General: For reasons that I don't really understand, the PCLinuxOS installer still tries to create an xorg.conf file. For reasons that I do understand at least a bit, it consistently gets the screen resolution wrong on many of my systems, especially netbooks, so they come up looking strange, with low resolution or only part of the screen used. No big deal, just log in the first time and then delete or rename the file /etc/X11/xorg.conf. Reboot, or just restart the X display server, and you have a 99% chance of X getting everything right on its own.

Samsung NF310: Installed very easily, but created an incorrect xorg.conf file (see above). Also, it recognized the Broadcom 4313 WiFi adapter, and it includes the brcm80211 driver, but it gave precedence to the older wl driver. I added blacklist wl to the file /etc/modprobe.d/blacklist, rebooted, and it came up running the (much better) brcm80211 driver. Finally, the touchpad seems a bit oversensitive, and it is difficult to tap and then move to another location to make a selection. I know that this can be adjusted, but I have not looked into it yet. Other than these three minor and easily fixed irritants, everything installs and works just fine, and it seems pretty fast to me. From boot to the login prompt is about 30 seconds, and from login to a ready to use desktop is about another 30 seconds.

HP Pavilion dm1-3105ez: Also installed very easily, also got the xorg.conf file wrong, also was fixed by getting that file out of the way. Looks particularly nice on this system once that is done. As this release is still running a 2.6.38 kernel, it does not yet include the driver for the Ralink 5390 WiFi adapter, but I was able to compile and install the driver (as I have described previously for other distributions), and then wireless networking was just fine. I was a bit disappointed that it doesn't get the second-generation ClickPad quite right, it does tapping and left-click, but right-click doesn't work. I will be interested to see if it gets the first-generation ClickPad in my Lenovo S10-3s right.

I will be installing this release on my other systems over the next day or two, and I will add the results of those installations to this post.

Firefox finally declutters the toolbar with the Unified Extensions button

What is Firefox Nightly and should you be using it?