By Charlie Osborne for Between the Lines | October 2, 2017 | Topic: Innovation 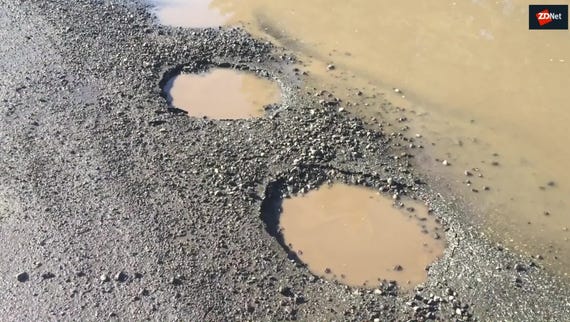 Roads patched up with recycled plastics are being pushed forward in the UK following a successful trial in Cumbria.

The UK's road system is a mess. Aging infrastructure, some roads more suitable for horse and cart rather than a constant stream of cars, and a lack of funding and repair by councils all contribute to less than ideal roads.

In Kent, for example, when you take a driving test, you often spend more time avoiding potholes and sinks on the road than you do watching the cars in front.

In the UK's typical fashion, we have a "National pothole day" to mock the issue -- but it is no laughing matter.

It is estimated that 2.2 million potholes have been repaired in the last 12 months at a total cost of nearly £120 million to UK taxpayers, made worse by old surfacing, rainfall, heavy usage and a general lack of investment.

Not only do cracks and potholes cause tyre destruction and sometimes injury -- speaking as someone with permanent back issues caused by going over a pothole on a motorbike -- but they cost money in compensation and repairs and can slow down traffic.

However, a pilot program launched by Cumbria county council hopes to tackle the issue by taking away most of the hot bitumen concoction required to fix holes and cracks, and instead use new materials made of recycled waste.

As reported by the BBC, the plastic material replaces a significant amount of bitumen, extracted from fossil fuels, and replaces it with pellets derived from household waste, such as plastic bottles and packaging.

The material was used to surface the A7 in Carlisle in a recent £200,000 project, and the council's proclamation that it was "very pleased" with the outcome will see the pilot rolled out to other locations.

The publication says that the A7 project involved the equivalent of off-setting 500,000 plastic bottles and over 800,000 plastic carrier bags, certainly good news for the environment.

Originally inspired by an Indian method of filling cracks in the roads with plastic waste and setting it on fire, the new material may not only reduce our waste levels but also revitalize local councils to keep on top of the patch-up process and improve the overall condition of the roads they have inherited.

By Charlie Osborne for Between the Lines | October 2, 2017 | Topic: Innovation