Now the second largest market for podcasts in the world, Brazil is attracting increased investment from players active in the segment.

Brazil is only behind the United States when it comes to consumption of the audio format, according to Podcast Stats Soundbites. Large companies placing their bets in the format, like Google, expect non-English markets like Brazil and India to grow exponentially.

The figures from audio streaming service Spotify also illustrate the trend. Monthly podcast consumption on Spotify has been growing by 21 percent in Brazil on average since January 2018, the company says. Globally, podcast audience for the firm, which hosts over 500,000 programs, has increased by 39 percent. 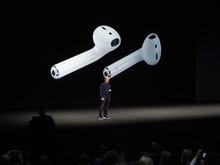 Why AirPods are the future of wireless audio Their sound quality may not impress audiophiles but Apple's odd-looking wireless earbuds set a new experience standard for connections that the industry should embrace.

"We want to become the world's number one audio platform and we are focused on audio more than any other global company. Brazil is one of the most important markets for Spotify in pursuit of that goal," says Javier Piñol, Spotify Studios director for Latin America.

The growth trajectory for the format in Brazil has prompted Spotify to host its first Spotify for Podcasters Summit in São Paulo, which took place last weekend. The event covered the company's offering in Brazil and a number of talks with podcasters and specialists in the subject as well as workshops for those wanting to try and create their own content.

Piñol expects continued growth for the Brazilian podcast segment. To qualify that prediction, the executive cites that 40 percent of Internet users in the country have listened to a podcast, according to a survey by local research firm Ibope.

"We want to increase that number even further and the [the podcast summit] will be a milestone for the company, as it shows the market that Spotify is home to podcasts, " he adds.

Another audio streaming platform, Deezer, has seen growth in Brazil too, with a 40 percent increase in consumption of the format among Brazilian users in 2018.

According to research released by the Brazilian Association of Podcasters on consumption patterns of that type of content, increasingly seen as an important media channel for corporates, 79 percent of podcast listeners do so while commuting while 68 percent listen to it while performing domestic chores. The average podcast consumption in Brazil is about 2 hours and 52 minutes.