Here’s something that immediately captures the imagination. A device that can charge your phone without wires!

The Powermat uses magnetic induction to do this. I’ve tried it, and it works.

You’ll need a minimum of two bits of kit. First, the Powermat itself. This comes in a couple of designs. I tried a portable mat that is comprised of three sections so you can fold it up and carry it around with you. There is also a flat, somewhat more stylish Powermat for more permanent desktop use. 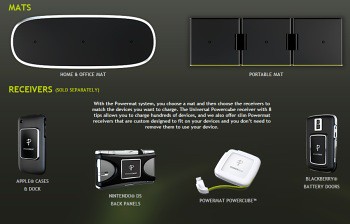 Second, the ‘receiver’. This is what connects your mobile device to the Powermat. There are currently receivers available for Apple devices, BlackBerry devices and Nintendo DS as well as a generic Universal Powercube Receiver which can cope with mini-USB, micro-USB, Samsung, LG, Nokia, Sony Ericsson, Nintendo DS lite/DSi and Sony PSP.

So, if you’ve an iPhone and a PSP you’ll need two receivers.

It isn't just a simple case of one receiver for BlackBerry users and another for Apple device owners, though. If you’ve more than one flavour of BlackBerry you’ll need a more than one receiver, because the receivers are replacement battery covers and so differ in size along with the chassis of each BlackBerry. iPhone and iPod Touch owners will need two receivers because in this case they are complete chassis covers and so again differently sized. Unless, that is, you opt for an upright dock which can cater for both Apple products and anything else that uses the standard Apple power connector.

The point is, you could be looking at a fair old outlay to get your wireless charging setup organised.

And by the way, it isn’t wireless.

The Powermat needs to draw power from somewhere, and that somewhere is the mains. So it plugs in via an ordinary three-pin plug. But there are no wires between the mat and the device you are charging. Well, except when you are using the Uinversal Powercube Receiver which connects one of its interchangeable tips to your device by cable.

I’ve been using the Powermat to charge an iPhone and an HTC Hero regularly, as well as various other products that have crossed my path over the last few weeks. It works, and it works well. It takes about the same time to charge devices as a direct mains connection does.

There is a ‘green’ element in that you are only using one mains outlet to charge up to three devices and you can even add in a fourth charged by USB via a socket in the back of the Powermat – if you have a USB cable to hand.

But it isn’t entirely wire free, it is expensive, and, to be honest, the Powermats themselves aren’t the nicest things to look at. Add in that devices already come with the ability to charge them and I feel that the Powermat is a really nice concept, but probably not excessively practical.