Project & Office 365; by the numbers, ready for Metro

How well is Microsoft's Office 365 doing? There aren't many official figures but some interesting statistics showed up at the Project conference last week.
Written by Simon Bisson, Contributor and  Mary Branscombe, Contributor on March 27, 2012

How well is Microsoft's Office 365 doing? There aren't many official figures but some interesting statistics showed up at the Project conference last week. According to Office corporate vice president Kirk Koenigsbauer, Microsoft is seeing "a trial customer roughly every 25 seconds come onto the service". By my calculations, that's 3,456 trial customers a day or 103,680 a month. He also noted that 70% of the seats on Office 365 are small and midsize businesses (for whom getting rid of an Exchange server and the work of managing it is a no-brainer, frankly; we moved our small business to Office 365 last summer). Over the next five years, he said, Microsoft expects half of the Exchange seats Microsoft sells to be Exchange Online (so Office 365 and Exchange hosted by Microsoft partners).

For comparison, Project itself is selling a copy every 20 seconds (which should be 4,320 copies a day and 129,600 copies a month). Those are all boxed copies, but yes, Project will be part of Office 365 (and presumably as more than just the Project Web App that's available with SharePoint).

"While we've got nothing to announce today specifically in terms of the road map, I guess I would just say of course we're going to have Project in the cloud," Koenigsbauer said. "There is absolutely no question about it. And it's one of those workloads that I think is really well suited to being in the cloud, because it's one where Microsoft can do the work to have it effectively deployed for customers, and set up, and managed, which enables it to really move beyond just the IT organization, and be accessible to sort of business units across the organization all up."

Unlike the Dynamics demo at the Microsoft Convergence conference, the Windows 8 demo in the Project keynote didn't include a Metro style app; instead it showed users pinning links to Project views on SharePoint sites, checking PowerPoint presentations and using the Lync 2010 app for instant messaging. Here's hoping that's because the Office 15 technical preview is still under wraps and we see something in the summer beta that offers the same kind of views of activity charts and available resources as the Dynamics Metro demo, which is the most impressive vision of Metro for business apps we've seen yet. 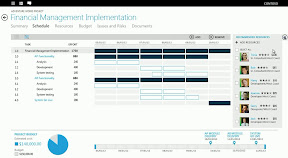 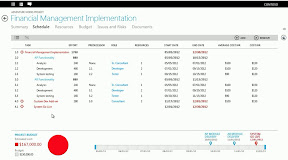 The Metro interface for Dynamics; an app you could do some real work in

One other figure Koenigsbauer mentioned. By 2016 Forrester predicts that 70% of tablets used for work will be ones the users are buying and bringing to work themselves. Microsoft has to be hoping a lot of those are Windows and WOA tablets and that's going to need a very Metro Office 15. 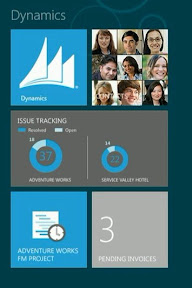 Live tiles for Dynamics; use a tile group to make your own dashboard for what you care about and Windows 8 looks like a much more business-oriented interface. Here’s hoping Office 15 has similar options…