Earlier this month I mentioned the PsiXpda in my personal blog. Now I have one and I’ve had the chance spend a little bit of time using it.

First impressions are mixed. Rightly or wrongly I’ve come to the device with a Psion Series 5 fan’s hat on, and from that stance the PsiXpda disappoints. I can confirm that it does not match the Series 5 for keyboard quality or pocket friendliness. I’ve had the two sitting side by side to test this. I’ve not tried it yet, but I’ll wager that battery life doesn’t match up either. 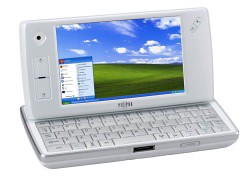 Putting those prejudices aside, I’m still deciding what to think of the PsiXpda.

The relatively bulkiness of the device means it can sport a 5-inch TFT screen with 800 x 480 pixels on offer. This is front facing, and slides up and is angled to reveal a full QWERTY keyboard.

Sticking with the screen for the moment, it is sharp and bright. I do, though, think that asking it to run Windows XP Pro is a tall order. Icons and menus are small, and I found it rather squint-inducing to work with the device for any length of time.

To the edges of the screen are various controls. On the right is a touch sensitive area that gives you cursor control, on the left a pair of mouse buttons. These worked well for me, and mean you can exercise fine control. The screen is touch sensitive too, which helps considerably particularly when you want to use the Psixpda without the keyboard on show. Ideally I’d like an operating system and apps designed for this screen size, but the cost of developing these is likely prohibitive.

As for the keyboard, again there are positive and negative points. It is flat rather than being made up of individual keys, which immediately disappoints in terms of the Series 5. It is too small to be used two-handed for touch typing (odd, as I can touchtype, albeit slowly, on the Series 5).

One or two of the keys on my sample require a smidgeon more pressure than the rest, which I found irritating to get used to. I hope this is an early sample glitch, and may seek a replacement if possible before writing a full review.

In comparison to the keyboards on smaller handheld computers, if the pressure sensitivity is ironed out this one should beat the best of them for usability, but it is not able to compete with a keyboard on an ultraportable laptop.

I’ve yet to slip a SIM into the PsiXpda and test its connectivity, or really delve into its potential as a fully useful pocket computer. But first impressions indicate I might have a love-hate relationship with the PsiXpda.