Cloud-based quantum computing could be helping to solve big science problems within the next decade, according to Bill Gates.

Speaking during an 'Ask me Anything' interview on Reddit, the Microsoft founder was optimistic about the future of the nascent technology.

"Microsoft and others are working on quantum computing. It isn't clear when it will work or become mainstream. There is a chance that within 6-10 years cloud computing will offer super-computation by using quantum," he said. 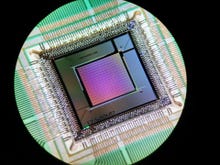 Google's quantum computer can blitz a normal PC - but it's not ready for production just yet Google's latest tests show there's light at the end of the quantum computing tunnel with its D-Wave 2X system running millions of times faster than today's technology.

Gates added: "It could help us solve some very important science problems, including materials and catalyst design."

Companies like IBM and Google are pouring millions of dollars into quantum computing in the hope of creating the next big thing in computing.

Gates is more optimistic than some: last year Intel said a fully functioning quantum computer was "at least a dozen years away".

However huge hurdles remain, including how to connect thousands of qubits together to build large-scale computers, how to control them -- or even measure the signals coming from them.

Gates also touched on the FBI-Apple row and his use of a Microsoft Surface Book during the session.

Join Discussion for: Quantum cloud computing could arrive in the...