Quantum computing: Getting it ready for business

Many digital leaders remain apathetic about quantum computing. But beneath the hype lies a game-changing shift in data-processing power -- and your company needs to get involved as soon as possible.
Written by Mark Samuels, Freelance Business Journalist on Nov. 1, 2021 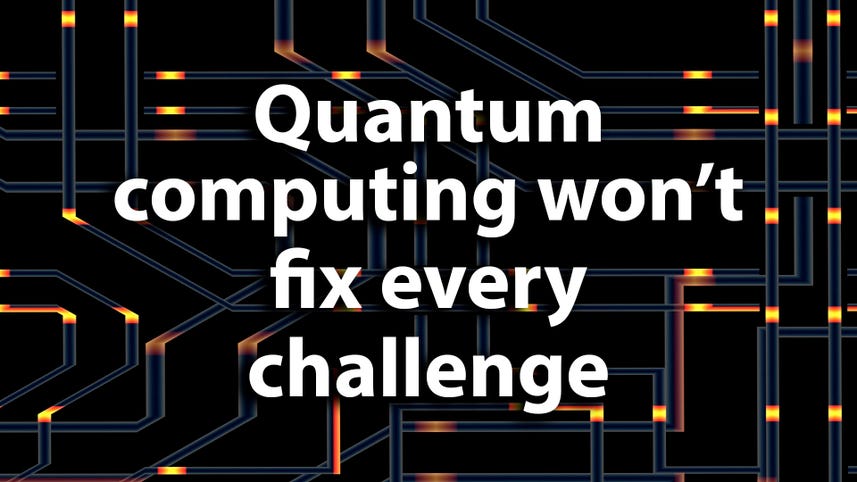 Quantum computing might be one of the most hyped areas of emerging technology right now, but that doesn't mean it's on every digital leaders' agenda. As one CIO said to me recently: "I haven't had a look at it yet, beyond reading some articles."

One explanation for this caution is that quantum computing remains at a nascent stage of development. Quantum is difficult to understand, and even harder to put into practice.

Analyst Forrester suggests we are years away from widespread business use in the real world. What's more, the researcher says this slow pace of advancement might even dissuade some enterprises from attempting to use the technology. The inherent difficulty of quantum computers could lead to interest tapering off.

It's this kind of analysis that makes CIOs' lack of interest in quantum easier to understand. Analyst Gartner has even urged enterprises to be wary of over-investing in quantum computing without specific business use cases in mind.

For a CIO with a hectic digital transformation agenda, focusing a great deal of time and energy on far-sighted developments that might not impact your business for the next decade or more is unlikely to be a priority. When your day-to-day reality is simply about keeping business operations up and running, it's tough to get excited about an advance in computing power that might be years away.

However, just because something's unlikely to impact your business for a while doesn't mean you should avoid it altogether. While Gartner says CIOs should be wary of sinking cash into quantum, it also says CIOs should "start curating" their quantum strategies today. In some cases, that might mean just trying to understand the potential impact on your business model or IT infrastructure, or having a few people keeping up-to-date with the the technology to build institutional knowledge, although some firms have gone further and set up pilot projects.

Yet he also recognises that quantum-led change is on the horizon -- even if it does take a while to manifest itself. In fact, Voegele believes quantum's mix with big data is "the next big evolution" in IT.

"I think what's clear is that there's big things coming with the use of quantum or supercomputing and its convergence with the analytics field -- specifically artificial intelligence and machine learning," he says. "And if these things start to convert, I think the doors will be wide open for a lot of new ideas and creativity."

Michael Cole, CTO of golf's European Tour and Ryder Cup, is more focused on other technologies -- including 5G, sensors and big data -- and is exploring how they can be used to improve how the sport is played and watched.

But he's also keeping an eye open to developments in quantum. He says golf is increasingly becoming a B2B testbed for the roll-out of new technologies, with start-up and big tech companies -- such as Tata, Zoom, Capgemini and others -- involved in this process. When the time is right, quantum might form part of those conversations, too.

"There is some blue-sky thinking that we need to undertake around key areas, such as machine learning, biometrics, quantum and NFTs," Cole says, "There will be a time and a place, and no doubt that will feature as part of our longer-term strategy. But right now, we're probably more focused on the medium term over the next three years -- and then we'll start to address the future technologies beyond that."

So while quantum is probably going to be too immature for many organisations to invest significant portions of their R&D budget today, that doesn't mean there isn't room for limited explorations into potential use cases.

That's certainly the story in the high-speed world of Formula One motor racing. According to Williams F1 CIO Graeme Hackland, quantum is a really exciting opportunity to take computation to a whole new level.

SEE: The CIO's next priority: Using the tech budget for growth

If Williams can get in there early before other F1 racing teams, then they'll have a competitive advantage -- and Hackland envisages big developments in quantum during the next couple of years.

"A lot of the teams have got great partnerships in this area, which is the same as us," he says. "But at the moment, quantum is still in enough of its infancy that some people will make a bet on something that doesn't work out, and some of us will make bets on things that are going to be successful. So the less said at the moment, the better. But it's a hugely exciting area."

Even if quantum computing is too early in its development for most CIOs today, that could change fast: tech researcher IDC expects 25% of the Fortune Global 500 will gain a competitive advantage from quantum computing by 2023.

Smart CIOs are already talking to technology experts and exploring how quantum might be applied to industrial use cases. If your business relies on huge amounts of processing power to solve challenging questions quickly, then quantum could be a game-changing technology.

Just as artificial intelligence and machine learning moved quickly from the fringes of research and development to the centre of boardroom discussions, so quantum computing will make a similar transition during the next decade. If you don't want to get left behind, then you can't afford to be apathetic about quantum computing.

Quantum Computing
How long does it take to get a business degree?