A move that is touted to reduce risks and costs without jeopardising the ability to learn.
Written by Aimee Chanthadavong on May 25, 2020 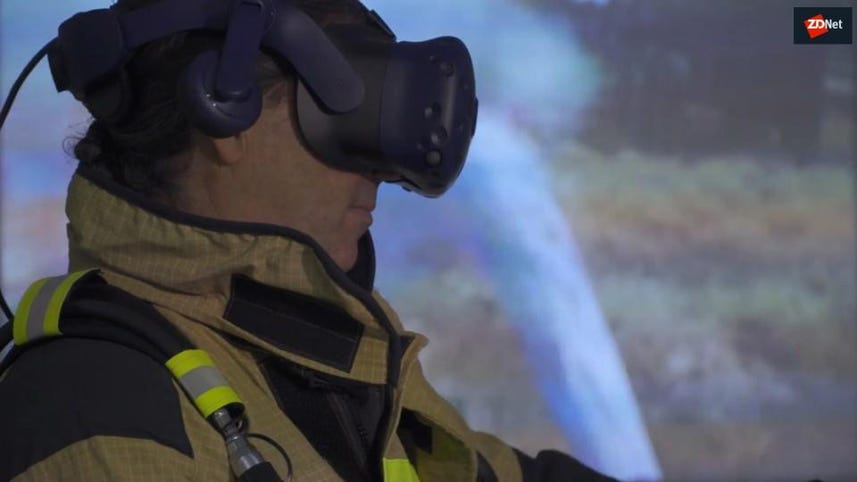 Speaking to ZDNet, QFES inspector Bruce Budge explained how the 360-degree VR training programs use a combination of technologies, including large projector screens, VR headsets, and haptic feedback devices, such as heat vests and hose reels, to provide recruits with realistic-like training before they are exposed to fires in real life.

"We're looking at a way [for] people to introduce people who have no previous firefighting experience to fires," he said.

He pointed to how, for instance, in the simulated version of a compartment burn training, recruits can learn about the behaviour of fires and other incident details with the support of trainers without being exposed to any risks. Typically, he said, a compartment burn can reach temperatures of up to of 800 degrees celsius and exposes firefighters to heat soak due to high temperatures.

"When a firefighter goes into a burning building, they can see what kind of conditions they are going into [and] if it's that critical, they do not go into that environment," Budge said.

"By going through that process of cold smoke with uncharged hose, virtual fires with charged hose, live fire, and breaking it all down by tapping into their situational awareness, they can start to recognise prime decision-making about when to make entry."

The QFES also touted that using VR and extended reality is a more cost-effective way to train its firefighters.

"Each compartment burn can range from AU$5,000 to AU$10,000 to organise, so we're reducing at least three-quarters straight up," Budge said.

"It also takes time to get people in the gear for it ... [and] following these burns compartments, a cleaning and decontamination process is required, which can add to the time factor."

See also: 5 strategies for navigating VR in the enterprise (TechRepublic)

Budge said the VR programs are an expansion of the situational awareness training the QFES currently delivers through three "fly-away kits" that are shared between the 1,500 QFES service delivery locations around the state.

"We've had those for about two years but we're just upping the numbers so we can get more out there," he said, highlighting how each of systems is a self-contained kit.

"All you need is an instructor delivering and coordinating the session, which includes an environment like a wildfire in bushlands, and they can introduce assets into that environment and match it to the training."

Budge said he would like to ideally see each of the seven regions in Queensland have access to three to four kits.

"It's about getting out of a centralised location, especially to support volunteers in their local communities so we don't take them out of their employment or their lives in the area," he said.

How VR is improving treatments for patients and training for doctors

HTC believes VR is the next big tech opportunity for education

But VR will only truly flourish when 5G does, HTC said.

California firefighters use Augmented Reality in battle against record infernos

Contextual mapping is giving first responders real-time information about threats as they unfold, and more AR tech could be on the way

Facebook is getting more serious about hardware to create tomorrow's way of connecting people.