Trials will kick-off early this year at the Fraser Coast.
Written by Aimee Chanthadavong on Jan. 8, 2020 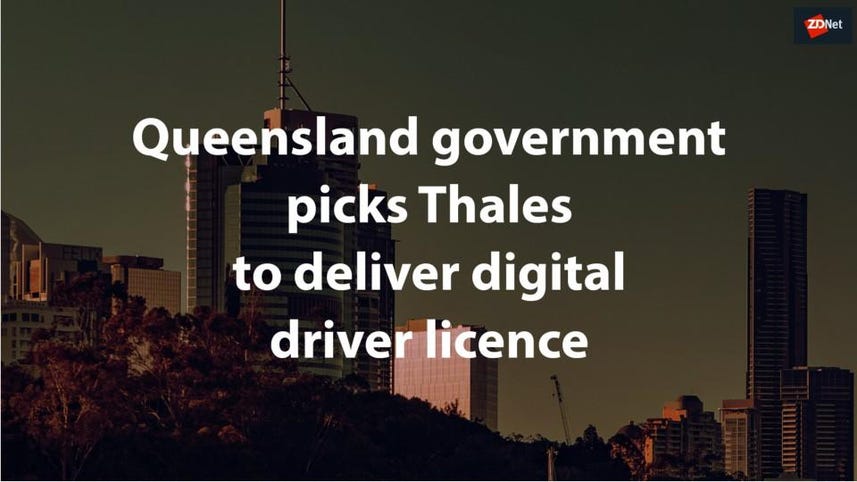 The Queensland government has awarded French firm Thales the contract to work with the Department of Transport and Main Roads and local firms Code Heroes and Aliva to design, develop, and deliver the state's digital licence app.

In addition to digital driver licences, Thales said the smartphone app will be designed to host a range of other digitised official documents including photo ID cards, marine licences, vehicle registration, as well as provide access to the Department of Transport and Main Roads' online services.

As part of the delivery process, the app will be designed to meet International ISO-Compliant Mobile Driving Licence Standards, which Thales touts will allow the state's digital driver's licences to be recognised and used overseas including the United States, United Kingdom, and France.

According to Thales, the app will initially be piloted in the Fraser Coast early this year, before it's extended to other regional locations and made available state-wide. The trial will include learner licences, photo ID cards, and recreational marine licences.

In September, the Queensland government announced it was trialling digital licences in Maryborough and Hervey Bay, but according to Thales, this will now take place in "early 2020".

This latest announcement comes more than a year after the state government said it was "well on the way" toward developing a digital identification for the state, announcing at the time that locals could soon have the option to store their driver licences digitally on their mobile devices.

A Transport and Mains Road spokesperson told ZDNet that Thales was selected from a shortlist of vendors that competed in a proof-of-concept design process for the digital licence app between July to November last year.

"The best design was scored by Queenslanders to help select the successful vendor. Thales Group was secured to help build the new technology this month (January)," the spokesperson said.

See also: Why blockchain could be your next form of ID as a world citizen (TechRepublic)

"The app will provide even more security and privacy ... because personal information will be contained behind passwords and biometric smartphone features," Transport and Main Roads Minister Mark Bailey previously said.

"Unlike a physical driver licence, the Digital Licence App gives you control over how much information you allow a third party to see, copy and retain, when you share it with them."

The rollout of digital licences in Queensland would follow in the footsteps of the New South Wales government, which went live with its own version through Service NSW last October.

In the first week of the digital licence launching, 12% of New South Wales drivers opted into the service.

Teething issues, however, saw the app unable to handle the number of people who initially attempted to add their digital licence to their Service NSW app.

New South Wales Minister for Customer Service Victor Dominello explained the demand was not anticipated, as numbers were forecast based on the uptake of DDL in South Australia during its trials.

"To be fair to us, when we officially announced it there were no issues. What happened was some people leaked the story ahead of time, and people jumped on because they were excited by it. Everything went according to our time line, which was the official date of the launch, everything was very sweet," he said.

"What happened … [was] there was a whole lot of demand that absolutely blew out our expectation and all we did was throttle the demand so we could cope.

"By day two that had been fixed because we fixed it overnight, but the system did not crash. We just throttled the demand so people could get through in an orderly way."

Updated 9 January 2020, 2:52PM (AEDT): Additional comments were provided by the Department of Transport and Mains Road.

Queensland licence application biometrics to be verified by Unisys

The new biometric facial image processing solution is hoping to prevent fraudulent licences from entering rotation in the state.