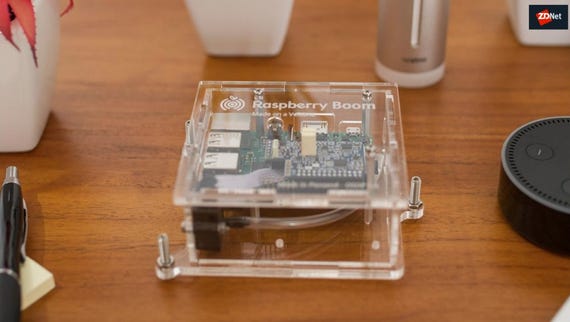 Raspberry Shake, the maker of an eponymous Raspberry Pi-based seismograph, has launched a new sensor that can pick up inaudible sound waves from earthquakes, landslides, or even the next SpaceX launch.

The Raspberry Boom is the sonic companion to the personal seismograph, both of which are sold to home scientists who want to be part of an Earth-monitoring network.

The new Raspberry Pi-powered infrasonic boom sensor can detect sounds from a local region that are inaudible to human ears.

Users can also connect the device to the Raspberry Shake network and contribute to its EQ Viewer, which displays recent earthquake activity, and Station View, which offers a map of significant ground motion.

Raspberry Shake used a prototype Raspberry Boom in February to measure sonic booms created by SpaceX's Falcon Heavy rocket launch and landing. It's also got software to generate a video that displays the waveform and spectrum of the sounds.

The developers believe that with a network of the sensors it will be possible to track and locate events including storms, planes flying overhead, gunfire, nuclear test explosions, volcanoes, and meteors.

And to support the Kickstarter campaign that launched yesterday, the developers are planning to send one of the Raspberry Booms 80,000 feet (24,000m) into the atmosphere on a 42-foot diameter solar balloon.

The company only had a $7,000 funding target, which it reached in six minutes, and has already exceeded that goal by over $40,000.

How to set up your Raspberry Pi 3 Model B+

This video walks you through everything you need to know to set up your Raspberry Pi 3 Model B+.

Canada looks to spark interest in computer science with the help of the BBC's micro:bit development board.

The new feature will allow Pi owners to write Arduino Sketches to interact with sensors, motors, electronic boards and other hardware attached to the Pi's GPIO pins.

Instead of repurposing an older computer, help your kids build one of their own without spending too much.