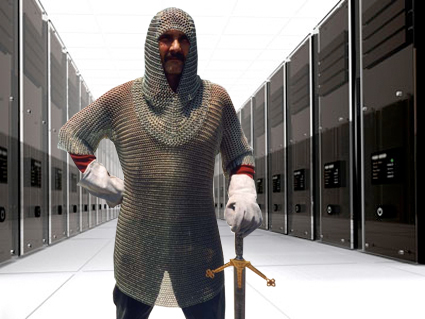 Larry Dignan wrote here about the reality that Microsoft's Internet Explorer 6 & 7 are the official, formal web browsers for 78% of companies, a figure arrived at by Forrester research.

The simple reason for this is basically security and software compatibility. Many companies also ban access to any social networking or instant messaging software for security reasons. This isn't a vacuum caused by lack of imagination, it's simply about IT department priorities.

Manning the firewall to protect the company from intruders and information escape is an important component of many IT job descriptions. The IT tools the rest of the employees are given to work with are predicated by perceived security risk level, just as the door badge and telephone system are secured.

The stale atmosphere created by this IT security is often railed against by line of business employees, who create ad hoc 'shadow IT' areas - the often illegal collaboration spaces hosted on servers under desks or within 'software as a service' sites online outside the firewall. These activities aren't driven by a rebellious streak or a devil may care attitude, they're simply the only way to pound through some types of work efficiently.

In most big companies duplicate (Re: Re: See attached version 4.7, do you have a copy of 4.2?) emails fly around, enterprise content management systems and shared drives fill up with more electronically stored information than those gray filing cabinets could ever contain, and walking around the cubes and asking questions is often the only way to join the information dots and get work done. Fragmented meetings fill the days, nights are spent catching up on email and voice mail.

Lurking in the background is the understaffed and harassed legal department, ever watchful for discovery and litigation crisis. Add in a few doses of rivalry and bad behavior heading south on the command and control management tree and you have the classic de facto western corporation.

Companies that are exploring innovation and collaboration networks are at this stage not even on the radar of most of these folks, and if they are thinking about these modern ideas it's typically through casual research done to maybe pick up some tips that might get used at some point in the future.

Parochial thinking often assumes that people gather round the water cooler to discuss the weekend and gossip everywhere on the planet, just like we do in the Chicago office, or that everyone else is organized the same way as we are in Barcelona.

Having painted that depressing picture - let's add that most people work to live, they don't live to work and tune out the above as they endure their working week, dreaming of their weekend - there's a slow revolution brewing in some places and raging in others.

IT department budgets are historically huge and software roll outs move at a glacial pace, often replacing one archaic looking system with a slightly more modern one at colossal expense in the eyes of the end user.

The economic crisis, globalization and outsourcing, aligned with mergers and acquisition activity - which is another term for slamming two different business cultures together - are transforming the speed and agility of how business gets done in some companies.

Shooting more holes in the firewall than the exceptions team can set up vpn's for, the enterprise model of the last century, replete with patch days and maintenance contracts on alphabet soup system seat licenses, is creaking at the very foundations.

At this point some hard working and dedicated IT staff in big companies realize they are working tirelessly to stop the very thing that will allow their employer and employees to succeed:  limiting collaboration and innovation. Productivity is hugely important, especially for publicly listed companies driven by quarterly numbers, and I'm not for a minute suggesting abandoning security policy or ignoring javascript incompatibilities - or the threat of sql injections - in browsers.

There is, though, an element of paranoia around the security policies born out of working with brittle, siloed applications which is greatly hindering adoption of newer, more agile applications. There are often layers of security walls inside company firewalls which prevent access to LDAP and other databases which in turn perpetuates the separate silos of information, with ensuing sluggish productivity.

Working tirelessly to keep these compartments closed wins the internal battle but loses the external war with more agile competitors.

People used to working in an environment where everything is locked down and your tool set is limited and unchangeable does not promote them thinking in innovative ways. The risk versus reward factors of greater productivity and innovation vary from place to place, and by industry sector of course, but disruption is increasing in all sectors at varying rates of change.

The generation coming into the workforce in huge numbers internationally now, who grew up with the internet, have different perceptions. The generation who grew up taking electricity for granted - always on, always there - saw postal mail disrupted by the telephone. Those who have never known life without the internet and mobile telephones view email like the postal service. Email is of course the digital version of a letter.

'Unstructured' information - the contextual collaboration that is the 'mortar' between the more inflexible applications, the 'bricks' in modern companies - comes naturally to those used to text messaging, using social networks, instant messaging and Twitter.

There are great swathes of society of all ages who think in this way - and none of these people are retiring anytime soon in the current economy - but IT security policy is often mired in this last century security focused thinking. The uneasy relationships between IT and line of business are hugely variable - and never forget who's keeping the system running after all the talk is over, even if it is a lowest common denominator system of legacy software held together with ingenuity and digital duct tape.  The reality though is that this key relationship is the primary front where competitive advantage will be won or lost.

The alignment and agility of partners, divisions, departments and team relationships has an ever increasing bearing on the success of the modern company, and just saying no because the last century rule book says so is a great way to ultimately lose the war to more agile and forward thinking competitors.