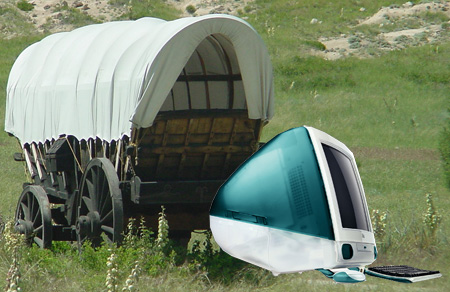 Here we are again in another commercial nuclear winter - last time it was predominantly a tech bust, this time tech will be the engine that pulls us out of the recession.

I've had several conversations recently about the whole 2.0 suffix being well past the sell by date: like 'dot com', casual use and diffusion of meaning has inevitably blunted the focus of the original movement.

Coming up on March 31st is Web 2.0 Expo San Francisco - I well remember the sense of excitement and momentum watching 'The Machine is Us/ing Us' on the conference big screens in March 2007 (here's its creator Anthropology Professor Michael Wesch explaining his thinking at the same conference).

Apple's product industrial design is ground breaking and exciting when new products are launched but quickly becomes dated: the same thing happens in our attention deficit world online as we speed towards the future. 'Web 2.0' applications are now part of the fabric of our daily lives, but it's important not to think of this a something which has been and gone like a first generation iMac: we've only just begun. We've digested the ground breaking ideas in 'The Machine is Us/ing Us' but people are often expecting to be served the next helping of innovative thinking.

As with the last slump, now is most definitely not the time to take your eye off the ball - most industry juggernauts are born out of recession when sharp minds are focused and the competitive field thins.

Earlier this week I was at the Economist's Marketing Forum conference in San Francisco at the same time as the SXSW Interactive Conference was winding down in Austin Texas.

The contrast between the tweets and other communication coming out of #SXSW and the online and live Economist event (#ecsf09) couldn't have been more different: where the Economist event was measured, strategic and tactical, the SXSW dialog and feedback often felt breathless and shallow. Discovering lightweight apps that will be superseded in a few months is no the same thing at all as strategizing around how best to rebuild the economy.

I'm making this point because Web 2.0 Expo is to some extent tarred by the same brush through no fault of its own. Twitter is genetically predisposed to self promoters: the company you keep in this medium defines the value of the experience you have. Following some of the international tech fashion set gives the impression of a giddy, superficial world of winners and losers in a funded snakes and ladders game.

The Economist Marketing forum, Web 2.0 Expo and Summit are all about moving the ball forward where the fashionable tech blogs, parties and tweets are often peanut galleries filled with opportunists.

An east coast clergymen visiting Gold Rush crazed Sacramento in 1849 observes in a diary entry appearing quoted in J.S. Holliday's book 'Rush to Riches'  ...Everything is new except the ground and trees and the stars beneath which we sleep. Quarreling and cheating form the employments, drinking and gambling the amusements, making the largest pile of gold the only ambition of the inhabitants."

(JS Holliday's earlier book 'The World Rushed In' is a wonderful book of real gold rush experiences if you want some fascinating non tech reading material).

OK that was a very harsh comparison -  but an additional point is that the California Gold Rush ethos of the 1850's era is now global, part of the 'flattened world'. Going west for gold is these days achieved through the medium you're reading this on rather than toiling through unfamiliar foreign terrain looking for a gold seam.

The post gold rush era was when all the real work got done in building California, and this year at least SXSW appears (admittedly from a distance) to be rather lightweight.

Creator of the term 'Web 2.0', publisher and Web 2.0 Expo conference organizer Tim O'Reilly has a terrific 13 minute podcast on the Economist website where he discusses the long view, which is well worth absorbing. It is this sort of long view around ways of collaborating better through collective intelligence - the post browser, sensor triggered data gathering world of massive high value data shadows - that is the high ground of the Web 2.0 Expo conference series.

This is where the foundations of the next generation of tech wealth are to be found both at the conference and by paying close attention online. The real work is just beginning after the initial gold rush and the world is changing very fast.