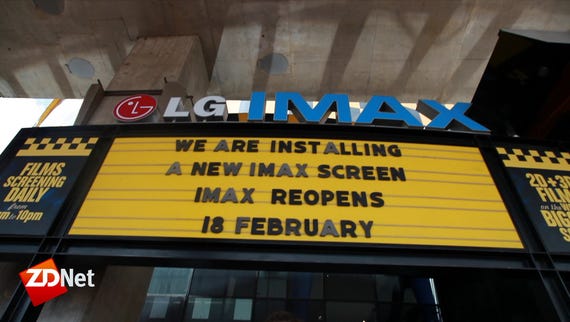 Sydney plays host to a lot of big things. The Sydney Harbour Bridge and the Sydney Opera House spring immediately to mind, but it also plays host to the largest screen in the world, at 29.5 metres high and 35.7 metres wide.

After a year of planning, this screen, housed in the Darling Harbour IMAX complex, was set to be replaced, so Nerdcam went behind the scenes to watch the monster go up.

The screen is more than just a piece of perforated vinyl painted with silver paint, it's a dizzying array of numbers. It weighs over 800 kilograms. It will take 350 kilograms of paint to cover over 12 days. It covers over 1000 square metres. It takes 31 riggers just to lift it into place. It took 12 months of planning and $250,000 to install.

IMAX CEO Mark Bretherton said that IMAX Australia is replacing the screen to give viewers a bigger, better and brighter 3D experience, but added that the company won't be replacing the projector anytime soon in favour of digital due to the issues involved.

Watch the video for some epic screen action and a chat with Mark Bretherton or see the photos here.