The remotely operated vehicles can be adapted to gather scientific data while being used to inspect and maintain offshore structures.
Written by Aimee Chanthadavong on April 19, 2020 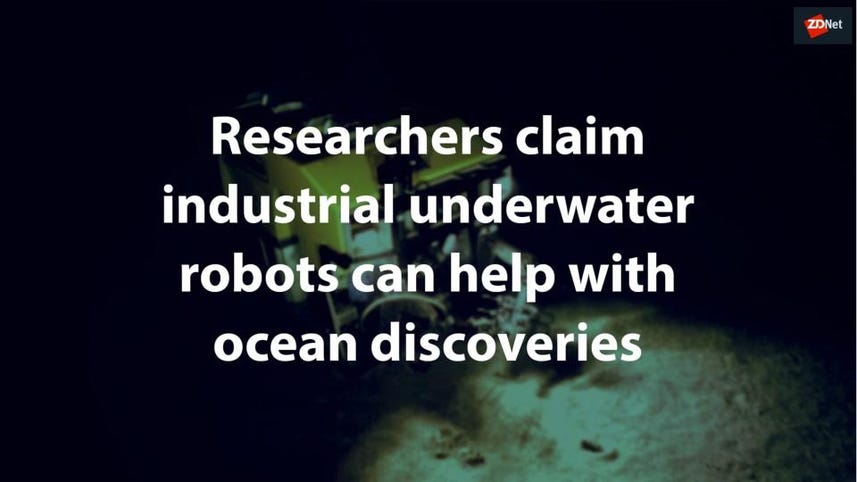 A team of scientists have published a paper urging for the oil and gas industry to think about how underwater robots -- otherwise commonly referred to as remotely operated vehicles (ROVs) -- could be adapted and used to help researchers gather scientific data about the marine ecosystem.

The team, led by Dianne McLean and Miles Parsons from the Australian Institute of Marine Science (AIMS), published the paper in the journal Frontiers in Marine Science, citing how "low-cost engineering and operational tweaks" to ROVs could be used to gather scientific information.

Some of the suggested tweaks included attaching additional cameras, audio transmitters and receivers, and sample collection devices to existing ROVs.

ROVs are typically used by the oil and gas industry to inspect and maintain offshore structures. But McLean believes they can be used, for instance, to collect water samples to analyse environmental DNA, make scientific discoveries, examine the impact structures have on the ocean, and understand how climate change is changing the ocean.

"Scientists have limited access to a lot of the deep oceans just because it is remote and costly to get out there that. The oil and gas industry is doing these surveys with ROVs routinely, we should work with them to get this information," she said, speaking to ZDNet.

"Just being able to access some of the imageries these ROVs collect could really provide us with huge insights about marine life down there."

Any scientific data collected would be equally beneficial to the industry, McLean said, explaining how it would help the sector make informed decisions when it comes to decommissioning offshore structures.

"At the moment in Australia, the law is [the oil and gas companies] have to remove these structures, and removing them causes a lot of damage to the marine environment, so the industry needs to show if -- they're going to leave anything behind -- they can't have any negative impact on the environment, and they need these scientific information for that," she said.

"So rather than get to the end of life and realise you have a lack of data on marine ecosystems  -- and because you're out there anyway with these ROVs doing inspections of all the equipment to make sure they're functioning fine -- you should really be collecting that scientific information along the way."

The next part of the study, which was initially scheduled for May, will see the AIMS work with energy company Santos to use ROVs to survey the marine life around three of its platforms.

"What we'll be doing is adding high-definition cameras on an ROV and use it to perform a scientific survey," McLean said.

It builds on previous research that the AIMS team carried out about how ROVs could be used as "eyes in the sea" to collect "millions of observations each year, fuelling scientific discoveries".

In a separate study, AIMS used ROVs to assess the growth of fish and marine life around oil and gas platforms.

Humans currently run the yards in logistics centers. That's about to change.

Smart farming: This weed-hunting robot is taking to the fields

The Internet of Wild Things: How the IoT joined the battle against climate change

From earth-observation satellites to smartphones listening out for chainsaws in the forest, cutting-edge technology is helping to record and protect the natural world.

The Aussie oil and gas producer is using data to remove operators from hazardous environments.