Second Sight's Argus device is one of a handful of commercial retinal implants now being used to help patients with degenerative eye diseases regain some degree of vision.

So far, the Argus has been largely implanted in patients who have retinitis pigmentosa, an eye disease where the light-sensitive cells in the retina -- the sensitive lining of the back of the eye -- gradually die off. Their peripheral vision will erode until patients may be only able to see only the brightest of lights, or no light at all.

Until a few years ago, there was practically nothing that doctors could do for patients with the later stages of retinitis pigmentosa. Now, however, medtech companies are bringing out tiny wireless units designed to replace some of the function of the damaged retina. 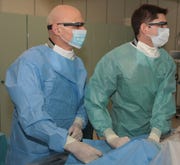 The doctor can see you now: The surgeons using Google Glass in the operating theatre With an 'enterprise edition' of Google on the way and likely to be focused on healthcare, medics are already showing wearables have a future for teaching and more.

The Argus, now on its second generation of hardware, is one of those units. It's the size of an aspirin and sits on the patient's retina, held in place by a tack the width of a human hair. The unit on the eye picks up images -- as well as wireless power -- from a camera mounted on glasses that patients wear, relaying them to the unit on their eye. The Argus unit converts those images into electrical impulses, much like a normal retina does, and sends them via the optic nerve to the patient's brain.

Creating a unit that can sit inside the human body is a tough engineering challenge: not only does the unit have to interface with the retina itself -- a structure Second Sight cofounder Dr Robert Greenberg describes as like "a one-ply sheet of wet tissue paper" -- it also has to contend with the internal environment of the human body. It's a salty place -- not a set-up that lends itself well to preserving electronic equipment.

"Putting electronics in the human body is like throwing your television into the ocean and having it still work," Greenberg said. "Electronics and salt water don't really mix very well -- salt water is extremely corrosive, particularly when you add electricity to it."

The images that the patient can see are blocky, gray-scale pictures rather than perfect colour vision, but even these simple images are enough to allow implantees to do tasks that they had once thought impossible.

"There are hundreds of stories. Seeing the moon is one of the experiences patients talked about as being very meaningful to them, watching fireworks, finding their objects at a table so they don't put their hand in their food. Seeing loved ones, and being connected to other people is probably the number one," Greenberg said.

Second Sight, the company that makes the Argus, implanted the first version of its hardware in six patients back in 2002, using an experimental electrode array based on a existing system used in cochlear implants -- devices that sit in the inner ear and can help deaf people hear sounds -- that were being produced by its sister company, Advanced Bionics.

The electrode arrays in the cochlear implants -- thin, rod shaped devices -- had to be retooled into a smaller, paddle-shaped piece of kit that could sit unobtrusively on a human eyeball. What may sound like a straightforward process was anything but, Greenberg said.

"It took us two years to design and test it until we were ready to put it in a human patient," Greenberg said.

The early unit, intended as an experimental design, only had 16 electrodes -- but it was enough for the six patients who had Argus I units implanted to put them to creative uses.

"We thought with only 16 electrodes, how much are you going to see? We thought it was a good experiment, but the patients taught us by scanning they could make quite good use of even crude resolution... We initially thought we'd have to provide maybe 1,000 pixels before someone would find the device useful, but it was really the Argus I that showed us, as a patient experience, that if they're completely blind, they could get quite a bit of utility even from a relatively crude implant," Greenberg said.

"One of our early patients actually played basketball with her nephew... she would scan her head, see the outline of the backboard, and aim for the centre. That was enough for her to play basketball," he added.

However, the first unit took four surgeons over eight hours to install -- an impractical amount of time and manpower. The second unit, the Argus II, can now be implanted by a single surgeon in around half that time as an outpatient procedure -- and, with 60 electrodes and an improved set of glasses, it provides better images for the patients.

One of the original Argus I implantees, who now has a second-generation unit, reports that the quality of the vision is much improved, explained Greenberg, though a full head-to-head comparison has yet to be carried out.

An Apple a day?: HealthKit and the future of medical data UK citizens should be able to provide their own data to their personal health records in the next two years. Is that good news for Apple?

Moving from the experimental Argus I to the commercial Argus II was a process that took around a decade and saw Second Sight file around 350 new tech patents along the way.

"Conceptually it was very similar [to the Argus I]. There were challenges in making it smaller and increasing the number of electrodes. No-one had ever built a neurostimulator with that many electrodes, and certainly not one that small - not small enough to fit on the eye," said Greenberg.

As well as the hardware, Second Sight is working on improving the software that the system uses -- on its 16th iteration since the Argus I launched. Future software upgrades, combined with the next-generation connected glasses expected next year, are likely to bring colour vision to the Argus II patients in 2018, a step up from the black-and-white they currently see.

Even further out, the scope of the diseases the retinal implants can treat is likely to expand. Currently, Second Sight is running trials in the UK using the Argus II for macular degeneration, a condition where all but the very edges of vision die away.

Unlike with retinosis pigmentosa, where the person can see nothing, in macular degeneration, some sight remains. That means that macular degeneration patients have to integrate the grayscale of the retinal implant with their own native vision, colour and all.

"One of the points of this experiment was to find out could they integrate it, or would they find it distracting or disturbing. So far, they do seem to be able to integrate the two and they seem to like it. Now we're trying to assess, what is the additive impact of having the central vision restored?"

Further out, the implants could be used to treat blindness resulting from optic nerve damage -- conditions that include diabetic retinopathies, glaucoma, or eye injury, which affect millions of people around the world. When the optic nerve, which connects the eyes to the brain, is damaged, for the implant to work, it has to be connected directly to the brain itself.

If all goes to plan, the new unit, known as the Orion, will be able to convey images from the same type of glasses used with the Argus II to a device fixed to a rear part of the brain known as the occipital cortex, where the visual images are processed.

"We expect to do our first patient trial next year. For me, it's incredibly exciting because of the sheer number of patients we can help."