Most Android owners who have explored the battery overview option in Settings know the screen is generally the biggest drain on their battery life. But what effect do the apps you install, and those your phone maker have installed for you, have on the how long your battery lasts?

Security vendor AVG has compiled a list of the worst apps for shortening battery life, based on anonymised data from one million of its users worldwide during the fourth quarter of 2014.

Many Samsung users complain of the company's pre-installed 'bloatware' and AVG's research bears out those gripes went it comes to battery life. For apps that launch on startup and keep running in the background, Samsung's Beaming service and Security Policy Updates (aka Knox) were the two biggest battery guzzlers, followed by Facebook and Waze.

Samsung was called out last October following its rollout of the Android 4.4.2 update, which ZDNet's Dan Kusnetzky reported caused a 30 to 40 percent drop in his Galaxy Note 2's battery life. The issue was traced back to Knox checking for and installing security updates.

Samsung's WatchOn media app also topped the list of battery draining apps run by the user, followed by OLX Free Classifieds, Telstra's app, Spotify, and Amazon. AVG notes that Netflix was the third biggest battery drainer in a previous report but dropped off the list after a November update.

"Samsung resolved battery life drain issues last year, including the example cited about the rollout of the Android 4.4.2 update. This particular issue was reported in June 2014, where the SPDClient service was removed and an intent message was instead implemented in the setting menu to respond when a device user agrees to the end-user license agreement that allows for the security policy update," a Samsung spokesperson added.

In addition, Samsung provided an updated SPDClient app on Google PlayStore and Samsung Apps store so that users can update their security policy by using the app. 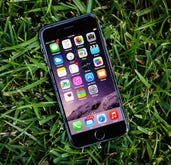 The storage hog list was topped by the Tango messaging app, followed by Daily Mail Online, Facebook, Spotify, and the Line selfie apps. Instagram, Chrome, SoundCloud, Ball Pool and Vine were next on the list. AVG notes that apps like Tango, Vine, and Daily Mail end up consuming storage because they're caching content.

The last potential pain point for Android users are apps that consume their monthly mobile data plan. Netflix used to top this list but has dropped to tenth place. The frontrunner in this category is now Daily Mail Online, followed by Tumblr, Facebook, Instagram and Spotify. Others in the top 10 include Yahoo! Japan, Apple Daily App, Yahoo Weather, and NAVER.

Games continue to dominate time spent on Android devices. However, gaming has fallen from 62 percent of time spent on mobile devices in aggregate during the third quarter to 49 percent in the fourth quarter, which corresponded to a steep rise in time spent using social (11 percent) and communication apps (10.3 percent). They were up from six percent and three percent respectively.

AVG's recommendations for Android users looking to conserve battery life is go to App Settings and disable notifications for apps that don't require them. For apps like Facebook, there's also the option to turn off Facebook chat and use only Messenger app as well as lengthening the refresh interval for automatic background downloads. The other is switching off GPS location services.