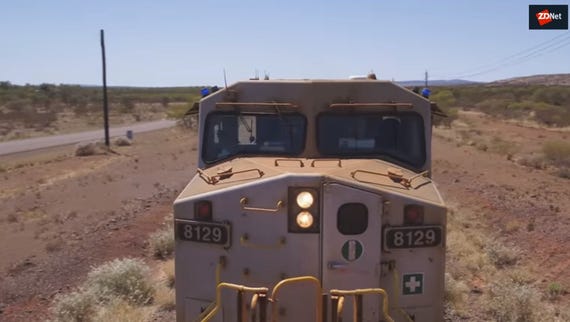 Mining giant Rio Tinto has said it will deploy fifteen autonomous trucks to its West Angelas mine in May, with the vehicles to be put through their paces this month during testing.

The company is eyeing off a target of 100 autonomous trucks in operation this year, and for the total to hit 150 the year after.

"This deployment is a special achievement for Rio Tinto as we pioneered the adoption of AHS [Autonomous Haulage System] in Australia at the West Angelas mine 10 years ago, paving the way for the significant autonomous fleet we have in operation today," Rio Tinto Iron Ore chief executive Chris Salisbury said in a statement on Wednesday.

"Rio Tinto has led the way in automation and has been on this journey for more than a decade. We've successfully managed the challenges and opportunities that automation technology presents and have a track record of reskilling, upskilling, and redeploying our people."

Last year, its autonomous fleet moved around one quarter of all material moved out of Rio Tinto's Pilbara mine sites, with the vehicles running for 700 hours longer than conventional trucks over the course of the year, and doing so for approximately 15 percent cheaper.

A decade ago, Rio Tinto introduced fully autonomous haul trucks as one of the first steps in its Mine of the Future program.

Rio Tinto's operations generate 2.4 terabytes of data every minute from hundreds of pieces of mobile equipment and sensors that provide real-time data on location and condition monitoring of equipment.

"Today much like an air traffic controller, it has many moving parts, and looks like NASA's control centre," Walsh said.

In October, the company claimed to have conducted the country's first autonomous long haul train journey.

The company's driverless haul trucks have now moved more than one billion tonnes of ore and waste material across five sites in the Pilbara region, Western Australia.

Using game simulations instead of expensive studies or traditional surveys is how one team of researchers is getting more accurate prediction models for self-driving cars.

Some Postmates and Domino's food, grocery and alcohol deliveries in Miami will be made using Ford's new self-driving cars as the auto manufacturer tests customer interaction with autonomous vehicles.