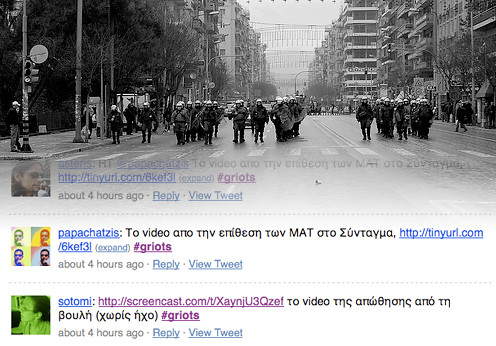 Tokyo is currently the largest city of origin of Twitter messages in the world, more than twice that of second placed San Francisco and New York in the USA as of this summer. (Incidentally, while the Japanese Kanji language Twitter service, which only launched in April of this year, contains advertising, the rest of the planet's Twitter service currently does not).

International usage of Twitter is pretty extensive, with multiple languages and character sets available. The recent attacks in Mumbai India had a pretty substantial online communications element to them, with the tag #mumbai widely used to track events in multiple languages, and with the attackers using Blackberrys and mobile phones to collaborate and to monitor the media.

The tag #griots is being used in Greece to mobilize protester collaboration in real time through Twitter, and to tag images and video. Rallying the '€700 generation' (the amount graduates can only hope to earn a month if they can find work- about 950 US Dollars) for change is greatly empowered both by the collaboration benefits of modern online tools, and also from an agitprop perspective.

It's sobering to think how powerful these forces are when empowered by modern collaboration technologies, and how quickly the information stream hits the rest of the planet pretty much in real time as events unfold, in multiple languages and formats.

The positive aspects of these technologies to align people for the common good are arguably more powerful, but good news never sold newspapers and 'if it bleeds, it leads' has historically led on US TV News.

Interestingly, regardless of the geographical origins of international event, English appears to be the tagging language of choice, presumably because it will reach the widest online audience.

Although the media focus on the more sensational aspects of the protests by 'extremists, idiots and provocateurs' thousands are protesting more peacefully for change in Greece. These people, although using the same online tags and with the same core desire for change, don't get the publicity or the international discussion engendered by more pyrotechnic and therefore photogenic activity.

Covert and overt usage of collaboration technologies is incredibly powerful, the catalyst for usage is in the motivation of the users.

Harnessing positive motivations, whether in a business setting or a public one, is the real challenge to empower force for lasting good.