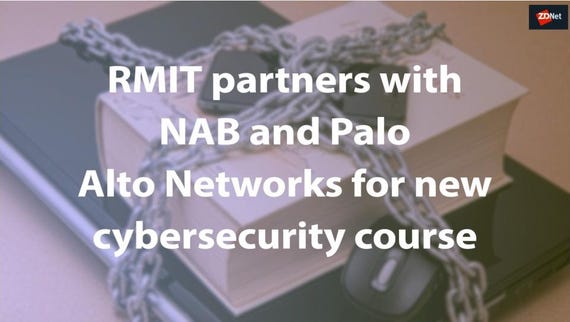 The Royal Melbourne Institute of Technology (RMIT) has announced a new online course on cybersecurity in a bid to address Australia's cybersecurity skills shortage.

As part of the course, RMIT Online has partnered with the National Australia Bank (NAB) and Palo Alto Networks, with both organisations to provide mentors for the course.

According to NAB head of security strategy and architecture Harvey Deak, the new course will provide "a sustained skills pipeline for generations to come".

"As the Australian economy becomes more and more digitised, it is critical for Australia's future economic prosperity that we build a highly skilled and educated cybersecurity workforce to help raise Australia's cyber defence profile," Deak added.

The announcement follows RMIT Online launching a slew of tech-related university courses late last year, which were also part of the university's plan to tackle the impending skills shortage in Australia.

Meanwhile, NAB set up an internal program in May to provide AWS skills training to its employees to curb against the effects of the skills shortage. The training program is available to more than 2,000 of NAB's staff, with the bank aiming to have its graduates become certified AWS Cloud practitioners so that they have the potential to become associate developers, associate systems operators, or associate architects.

Australia is set to lose around AU$400 million in revenue and wages due to the skills shortage, according to a 2018 report [PDF] by non-profit organisation AustCyber. The report also said that 17,600 additional cybersecurity professionals will be needed by 2026 to fulfill the nation's cybersecurity needs.

The Cyber Security Risk and Strategy course will start on June 3.

3 reasons why the tech talent shortage is overblown (TechRepublic)

Tech employers actually have an easier time finding talent than those in many other industries, according to an Indeed report.

12 operations roles with the greatest IT skills shortages, and how to fill them (TechRepublic)

Digital transformation efforts have put a strain on development, security, and operations teams, according to 451 Research and Polyverse.