Safety is a massive unaddressed issue in the rapidly evolving automation sector.
Written by Greg Nichols, Contributing Writer on July 10, 2019 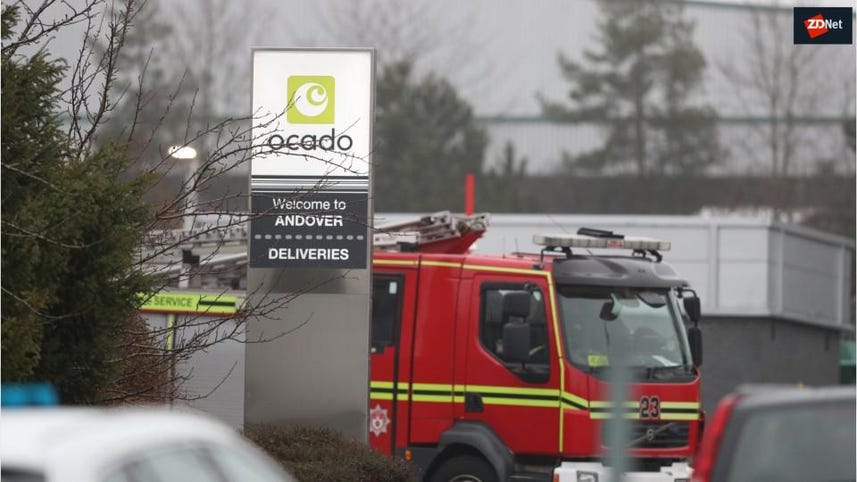 In February, a robot at an Ocado fulfillment warehouse sparked a massive fire. The warehouse was destroyed, and the British grocer has just revealed the price tag of the damage: $137 million.

The information was released in Ocado's half-year report and was noticed by Sam Shead in Forbes. Ocado, a household name in the UK, is an online grocer that's made an art of home grocery delivery. Like Amazon, the company relies on massive warehouses and has invested heavily in automation to speed up order fulfillment.

Last year Ocado partnered with Kroger to be an exclusive fulfiller for the U.S. supermarket giant. It's part of a broader Ocado push to bring its online grocery fulfillment to international markets -- a push driven by technology.

Across the industry, there's a race underway to offer the fastest, cheapest home grocery delivery. Amazon is the market leader in the US. and has maneuvered to secure that footing with its acquisition of Whole Foods, but it's still a fractured market with lots of potential customers up for grabs.

Automation technology in the form of warehouse robots is driving the race, but the logistics of grocery delivery are extremely difficult, with SKUs coming in a staggering range of shapes and sizes and varying temperature requirements. Amazon, which is the undisputed online fulfillment leader, has had to scale back its grocery delivery operations after seemingly expanding too quickly.

The Ocado fire may be another symptom of companies leaning hard into emerging technologies to expand market share. The official cause of the fire was a faulty battery charging unit, according to the company in a shareholder meeting.

Presciently, Melonee Wise, a robotics pioneer and CEO of Fetch Robotics, drew attention to the looming safety concerns in the automation industry when we spoke at the end of last year. "I honestly hope 2019 is the year that robot safety becomes a top priority, says Wise. "The potential mistakes of one robotics company could set our industry back for years."

Ocado is a cautionary tale. Technology brings speed and efficiency, but automation technologies are evolving faster than protocols can be developed.

The aftermath of the fire has been devastating for Ocado's outlook. The company's losses for the year will reach nearly $175 million.

Woot! Things that Suck sale: Enjoy up to 60% off a Eufy robot vacuum

Woot! Things that Suck sale: Enjoy up to 60% off a Eufy robot vacuum