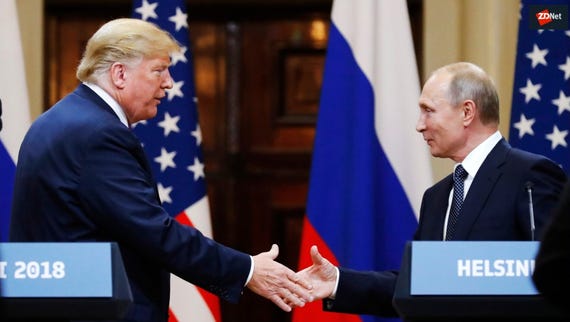 Russian attempts to meddle in the upcoming US mid-term elections continue, according to intelligence chiefs.

Speaking at a White House briefing National Intelligence Director Dan Coats told reporters: "Our focus here today is simply to tell the American people we acknowledge the threat. It is real. It is continuing. And we're doing everything we can to have a legitimate election that the American people can have trust in."

"In addition to that, it goes beyond the elections," Coats said. "It goes to Russia's intent to undermine our democratic values, drive a wedge between our allies, and do a number of other nefarious things." However, Coats said the current meddling was not on the same scale as was seen in 2016.

"This threat is not going away," he said. "As I have said consistently, Russia attempted to interfere with the last election and continues to engage in maligned influence operations to this day. This is a threat we need to take extremely seriously."

Earlier this week, vice president Mike Pence outlined some of the efforts the US has made to strengthen its infrastructure against cyberattacks, such as making $380m available to states to help them ensure the security of their election systems, including upgrading voting machines. New sensors are being deployed to monitor election networks and to identify potential intrusions at the state and local level.

He also said that recent elevation of US Cyber Command to a combatant command would act as a deterrent. "Gone are the days when America allows our adversaries to cyberattack us with impunity," he said.

"Russia's goal was to sow discord and division and to weaken the American people's faith in our democracy. And while no actual votes were changed, any attempt to interfere in our elections is an affront to our democracy, and it will not be allowed. The United States of America will not tolerate any foreign interference in our elections from any nation state -- not from Russia, China, Iran, North Korea, or anyone else. As President Trump said, 'We're not going to have it'."

However, it is not clear whether Russia has faced any serious consequences for its meddling in the run-up to the 2016 US presidential election. For its part, Russia has mostly denied any involvement.

Complicating matters further, President Donald Trump has proved on occasion reluctant to blame Russia for the election meddling. At the recent Helsinki summit he said President Putin had been "extremely strong and powerful in his denial" of Russian interference and said "I don't see any reason why it would be" Russia that had meddled in the election. Trump later clarified he meant to say "I don't see any reason why it wouldn't be Russia."

Indeed, US officials have struggled to find some kind of deterrent that works against Russian interference. Earlier this year the US State Department published a document on cyber deterrence that warned: "Strategies for deterring malicious cyber activities require a fundamental rethinking."

The Obama administration issued sanctions against Russia in 2016 and the Trump administration has followed with additional sanctions and indictments. The US government has also tried to be more public about pointing the finger at Russia over cyber meddling and to coordinate naming-and-shaming with other nations.

But sanctions do not seem to have had much impact and the indictments are unlikely to lead very far as Russia is unlikely to be willing to hand over any of the individuals for questioning. And naming-and-shaming has not made much of a dent as it only enhances Russia's reputation as a cyber actor.

When asked about potential sanctions against Russia, Coats said: "I would support any efforts that we can collectively put together to send the signal to Russia that there is a price to pay for what they're doing. And if we want to have any kind of relationship whatsoever in dealing with things of mutual interest the Russians have to stop doing what they're doing or it's simply not going to happen."