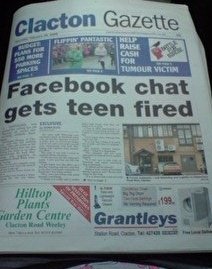 Kimberley Swann of Clacton on Sea in England was fired from her job at Ivell Marketing and Logistics Limited after she wrote that her job was dull on her Facebook profile. "all i do is shred holepunch n scan paper!!! omg!'" ... "im so totally bord!!!" 16-year-old Swann said she never mentioned by name the company she was employed by. Her former boss at Ivell Marketing and Statistics, Steve Ivell, claimed the firing was justified as Swann 'publicly' posted comments and shared them with coworkers.

The UK tabloids have had a field day with this story (Murdoch's 'The Sun' headline 'Social not-working'...)  - social networking firings due to employee indiscretions seem to sell papers in the UK, with Virgins' public firings of Facebook using flight crew last year and British Airways more recent termination of staff for calling passengers 'smelly and annoying', also on Facebook.

Kimberley's brief work saga could have been made for the comedy program 'The Office' - Ivell Marketing and Logistics Limited have done a great job of raising their profile in all the wrong ways and hopefully Miss Swann made enough for a few drinks from the tabloids. Essex BBC got a few quotes:

"This is a 16-year-old child we're talking about. She says Clacton is boring but we're not going to throw her out of the house for it."

Mr Ivell said: "Ivell Marketing is a small, close-knit family company and it is very important that all the staff work together in harmony.

"Had Miss Swann put up a poster on the staff notice board making the same comments and invited other staff to read it there would have been the same result."

She said: "Most employers wouldn't dream of following their staff down the pub to see if they were sounding off about work to their friends."

(The TUC is the Trades Union Congress, a federation representing the majority of United Kingdom unions).

The last comment by Brendan Barber is right on the money from a UK cultural perspective: historically a few pints, cigarettes and grumbles after work in the pub has been a popular way to unwind. Management could set foot in the same bar and eavesdrop, but they are more likely to be in a different one grumbling about their staff as well....

Forging a close knit team has to take into account these cultural safety valves, and this is clearly the way Facebook was being used on this occasion. To be fair to employer Ivell, there may well be more to this than we know. Kimberley may have been a socially corrosive team employee. Nevertheless, this does appear to be yet another fascinating cultural clash of the ages: it would be interesting to know if Ivell, who provide Asian outsourcing services, are using modern collaborative technologies internally.

I'll contact them to find out after al the excitement has died down. I've befriended Kimberley on Facebook also and will get her perspective as well. She's 'gana b on bbc look east 2nyt at 6.30' if you're in the UK and want to tune in...