Part of a ZDNet Special Feature: Wearables: Fit For Business?

While Salesforce.com recognises that wearable technologies are still in its infancy, the company believes it is the "next mobile revolution" in the enterprise space, and to drive this uptake it has announced Salesforce.com Wear.

Wearables: Fit For Business? The explosion of interest in wearable computing is one of tech's fastest rising trends. While big moves from Google, Apple, and Samsung will likely attract a lot of attention, we're going to examine the broader potential that wearables hold for driving innovation in business.

Salesforce.com Wear is a developer pack targeted at app developers to create enterprise apps for all major wearable devices in the market, and allow developers to build on existing mobile apps on its Salesforce1 platform.

As part of Salesforce.com Wear, the company has created six end-to-end applications for six wearable devices:

App developers will be able to download the code for each app for free and use it as the basis of their own app developments. Debow said the Wear packs are the solution for the challenges app developers often come across if they are looking to build apps for wearable devices, including connecting a wearable device to the Salesforce.com cloud services.

"So as a Salesforce.com developer all you really need is to be able to connect them, but that's difficult for you to do that as an individual developer.

"So what we've done is worked with these manufacturers to solve these problems and through the developer pack we are going to give away our solution suite problems for free, so they can incorporate them into their product. We want to jumpstart them building wearable apps. We've already built apps for top devices out there, and we want them to think about what they can do. We're just offering the beginning of it."

However, Debow doesn't deny that it's still early days for wearable devices, but suggests given that wearables are experiencing five times faster growth than smartphones initially were, it provides the compnay confidence that wearable technology marks the next stage of mobility. 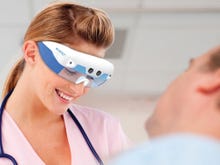 Wearables in business: Five companies getting real work done Wearables are still trying to win over consumers, but they have made strides in the enterprise. Here are five companies using wearables to add value to their business.

"There is no question it's still very early in the development of the wearable market," Debow said. "What we see happening is an acceleration of technology adoption. We compare the growth rates of wearables to smartphones and what we saw is this is growing five times faster on year basis than smartphones ever did. What that says to us is the next wave of a mobile revolution, and the time to help our customers to get ready is now.

"We don't want to be like other vendors and wait, we want to be preparing our customers as they get to the future. We want to greet them with answers, and the best way is to engage our developer community, which is what we're doing."

Debow also draws on how Disney World is already using wearable technology in its theme park to illustrate that wearable technology is nearing "mainstream" uptake, where each visitor is provided a personal wearable device to gain access to the park, get onto a ride, book a reservation for a ride, pay for lunch, and access their hotel room.

"The main point is Disney is about mainstream as you get," Debow said. "It's not science fiction; it's a real large scale demonstration of the power of wearables, and I think we'll see this proliferate all sorts of experiences and consumer experiences in society."