Salesforce wants to encourage Brazilian customers to invest in systems supporting digital transformation by creating a sense of urgency around resuming their innovation strategies.

The cloud CRM vendor is optimistic about Brazil and has doubled the size of its annual Salesforce World Tour event in São Paulo, to which over 8,000 people signed up to attend. According to chief operating officer for Latin America, Enrique Ortegon, the company is "excited" about business prospects for the Brazilian market.

"[The opportunities in Brazil] are all about digital transformation, with focus on mobility and customer experience," Ortegon told journalists at a press event yesterday (15). 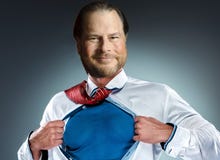 ​Salesforce as takeover target: Here's a look at the potential buyers Salesforce has a gawdy market cap so the field of potential acquirers is limited. Nevertheless, a handful of tech giants led by Oracle could pull off a deal.

Brazilian companies are now facing the decision of investing in modernization again or facing their own "fast and painful death", Ortegon said. However, this reality doesn't appear to have fully sunk in at companies: according to Salesforce's own research with 100 local companies with over 500 staff, just over half (58 percent) of those polled feel they are moving at the same pace of their competitors in terms of digital transformation, while only 15 percent feel they are ahead of the game in that regard.

Overall, on a scale ranging from 0 to 100 points, the overall business digitization index in Brazil reached 67.5. Across the study's key pillars, mobility reached 80, followed by speed and productivity (77), intelligence (56.5) and connectivity and integration (41.5).

To address the uncertainty of current and potential clients, the company plans on showcasing international success stories and developing education programs to dispel misinformation around areas such as artificial intelligence and data analytics. The firm has also created a free online tool that enables buyers to measure their state in terms of digital transformation and compare it with the study findings.

The goal, according to Ortegon, is not only drumming up more business but also increasing the company's portfolio of user success stories in what is Latin America's largest market.

"Regardless of the political situation, companies still have to sell and grow," Ortegon said, adding that the current focus of executive debates in Brazil is rather different to what was being discussed prior to the recession.

"Five years ago, the conversations were about what was happening in Brazil; nowadays, the focus has shifted to what is happening worldwide. [Brazilian CxOs] want to understand more about the global startup scene and generally about what international companies are doing in terms of innovation," the Salesforce executive pointed out.

Ortegon hopes that in the coming months, Salesforce will be having more "conversations about world class digital transformation projects" with its Brazilian clients.

"We have been in Latin America for 12 years, but over the last two to three years we have seen a change of pace - we see many opportunities and the trends support that: cloud adoption in Brazil, for example, is one of the highest in the world and we predict a lot of continued growth around mobility too," Ortegon added.

Commenting on a recent meeting with Salesforce co-founder Marc Benioff, Ortegon said the challenge in achieving his growth objectives in Brazil can be summed up with Benioff's "beginner's mind" principle of constantly seeing the world anew and not resting on the firm's laurels.

"As we grow as a business, the challenge is staying humble and not getting too comfortable, while continuing to transform ourselves and at the same time delivering the best to our customers," the executive concluded.