Handset maker Samsung has acknowledged that there is a problem using the Galaxy S4 on some wi-fi networks that use D-Link routers.

The company confirmed to ZDNet that the Galaxy S4 had problems connecting to, or staying connected to wi-fi networks that used some D-Link model routers.

"This is a problem caused by firmware stored on a specific access point in D-Link routers. Customers should update their firmware to the latest version or reboot the access point," a Samsung spokeswoman said.

Samsung Galaxy S4 owners have taken to a number of online forums to complain of the problem, which seems to most often affect D-Link model DIR-655 and DIR-855 routers, among others. Users in a number of different countries, or with different mobile operators and broadband providers, complained of the same issues.

"Is anyone experiencing wi-fi connection problems with the S4? Picked mine up yesterday and when I connected to my home wi-fi, it would connect fine and work for a few minutes then completely drop the connection. I would need to disable and re-enable wi-fi for it to connect again only to have it drop after a few minutes again. This has been going on all night yesterday and all day today," Will822 wrote on Samsung's GalaxyS4forums.net.

Other users also reported similar issues, which seem to be able to be mitigated by changing the security encryption type to TPK, which can have a detrimental effect on other devices connected to the network.

"Have tried several firmware [builds] for the router, all with the same problem. If the fault lies with D-Link or Samsung I don't know, but the S4 is the first to have these problem," user Brochs wrote on the XDA Developers Forum. 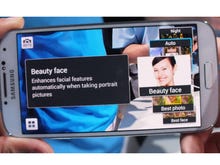 The Galaxy S4 is Samsung's (and Android's) flagship smartphone - here are my first impressions after getting some hands-on time.

"Same problem with a DIR-655. The router keeps locking up, even on a wired connection I can't get anywhere until I turn off the wi-fi on the GS4," eshomsky wrote, also on the XDA Developers forum.

"I confirm the same problem with a Samsung S4 and a D-LINK DIR-855. Setting the cypher type to 'TKIP' solves it for Samsung but it breaks it for an older Sony laptop," EnF70 wrote on the XDA forum.

D-Link acknowledged the issue and said it was actively looking into the cause of the problems.

"Recently, a limited number of customers have reported connection issues between their D-Link wireless router, including the DIR-855 and DIR-655, and the Samsung Galaxy S4 handset. Problems include intermittent disconnection from the wireless network, especially while browsing YouTube. Other devices continue to function normally. The problem has also been reported with wireless routers from other manufacturers, "a spokesman for the company told ZDNet.

"D-Link is actively researching this issue now to determine the cause."

The company suggested that customers using the DIR-655 or the DIR-855 could mitigate the problem in the meantime by logging into the web interface and disabling the Wireless Multimedia Extensions (WME, also known as Wi-Fi Multimedia or WMM).