Samsung's Galaxy Book Pro is a solid work laptop that features some consumer perks, but the device says more about the consumer electronic giant's multi-screen strategy as much as it does productivity.

I was far more familiar with Samsung's Galaxy Book Pro 360 that came with an S Pen and a form factor that made it more friendly for jotting down notes. The Galaxy Book Pro is more lightweight laptop that's nice and light for travel and trips to the office. 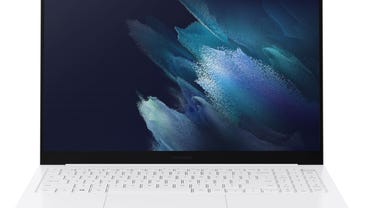 Ultimately, I was often wondering what made the Samsung Galaxy Book Pro a business device. For instance, the laptop includes Alexa and Cortana. I know Alexa has business use cases, but it often just serves as a distraction. And then there's the camera on the laptop that features a bevy of beautification options similar to what you'd find on a phone.

In short, I could make my eyes bigger, nose smaller and chin thinner. I could also wear makeup. But since I'm not exactly the Snapchat, Instagram and selfie type my beautification efforts went horribly wrong. I looked bizarre.

The camera settings took precedence over whatever I had going on with Zoom. A professional mode would have been nice before I showed up for a meeting. It was a good gag, but hard to revert to normal quickly. My camera fiasco does illustrate how consumer and business laptops are essentially converging.

Other Samsung apps, notably Flow, had good integration with Samsung devices and it was easy to sync notes, messages and files between the laptop and smartphone. Like Samsung devices, you have a few applications trying to keep you in sync. Microsoft applications were playing the same game on the Galaxy Book Pro.

Bottom line: Samsung's laptops have improved dramatically led by the Galaxy Book Pro 360 and Galaxy Book Pro. The latter is a solid choice, but Samsung may need to deliver more aggressive pricing in the future with an AMD option should it want to gain share. My bet is that the Galaxy Book Pro will see discounts for holiday shopping and Black Friday as Samsung aims to grow its PC footprint.