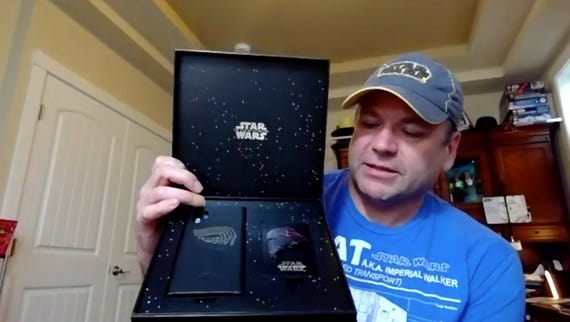 Given my online moniker of palmsolo, it's pretty clear I'm a Star Wars fan. I was eight when the first Star Wars was released and immediately fell in love with the movies while collecting trading cards, toys, characters, and more over the past 42 years. Over the past few weeks I've been testing out the Garmin Darth Vader watch and wondering how else I can include Star Wars in my daily life.

Last week Samsung released its Galaxy Note 10 Plus Star Wars Special Edition device with The Rise of the Skywalker elements in the hardware, software, and even accessories. Samsung loaned me one of these unique new devices and it deserves some discussion of its own beyond our Note 10 Plus full review.

Samsung also includes a unique color variant of the Samsung Galaxy Buds. The earbuds themselves are black, but the charging case interior is colored red while the exterior is matte black. The Galaxy Buds are one of my favorite earbuds and are valued at $129.99.

The same Galaxy Note 10 Plus with 256GB internal storage is priced at $1,099.99. The Kylo Ren Black model in the Star Wars Edition package is $1,299.99. While it is $200 more, you get the $129.99 special color Galaxy Buds, a very nice embossed leather cover (easily a $50+ case), and a metal badge for this premium. The phone and S Pen also have unique color combinations that cannot be found on other Galaxy phones.

If this phone had launched with 5G support on T-Mobile then it would have been a no-brainer purchase for me. I absolutely love all of the Star Wars elements present in this package and am going to be sad to return it to Samsung.